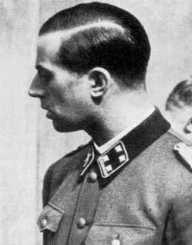 Karl Brandt was a German physician born on January, 8th, 1904. He joined the Nazi party before serving as a Personal Physician of Adolf Hitler. He was later appointed as the Health and sanitation Reich Commissioner. Though Karl Brandt was a skilled doctor, he later dags his own grave. This was when he involved himself in major crimes against humanity. He was for instance involved in forced sterilization and forced abortion programs. The Nazi regime which he was part of, forced thousands of women to abort. They described these women as “genetically defective.”  In his later years, he was accused of participating in cruel human experimentation. He faced trial along with 22 others. He was found guilty and was executed by hanging on June 2nd, 1948.

Karl Brandt was born on January, 8th, 1904 to a Prussian Army officer. His place of birth was in Mulhouse in Alsace-Lorraine. During his education, Karl studied medicine. He later specialized in spinal and head injuries as a surgeon from 1928.

In January 1932, Karl Brandt became a member of Nazi Party. Some months later he attended Wilhelm Bruckner who was an adjutant of Adolf Hitler. He had been involved in an automobile accident and was injured. Karl Brandt skillfully attended to Wilhelm and Hitler took a liking to him. He, therefore, requested Karl to be part of his physicians.

Karl Brandt became a member of the Sturmabteilung (SA) in 1933. This was the Nazi’s party’s initial paramilitary wing. He also joined the Schutzstaffel (SS) a year later. Hitler grew fonder of the physician enough to appoint him Untersturmführer officer rank.

In 1933, the Nazis enacted a law that prevented the birth of any Hereditarily Diseased Offspring. The law was titled Gesetz zur Verhütung erbkranken Nachwuchses. Abortions were then performed in over a thousand women. These women were thought to be “genetically defective.” Karl Brandt was one of the lead medical Figures who carried out the forced abortions. Hitler had never been this much impressed by Karl. He appointed him as his escort physician from 1934.

In 1939, Karl Brandt became the leader of the T4 euthanasia program along with Philipp Bouhler. By then a compulsory sterilization law had been put in place. This law allowed the elimination of individuals who were physically handicapped, deformed, incurably ill or mentally ill. Again, Karl Brandt was among the major medical figures of this cruel program. They kicked off by killing a baby boy who had physical deformities. This was followed by the killing of thousands of persons in Austria and Germany.

Karl Brandt continuously ascended into power with his brutality. Hitler appointed him as the Commissioner of Health and Sanitation in 1942. This was a great promotion to Karl. This the highest rank ever that a medical figure had ever achieved in Nazi Germany.  This was not the end though; he was promoted to several other positions after that. When the war came to an end, Karl was among 22 others charged with crimes against humanity. This led to the execution and the end of his life on June 2nd, 1948.

In March 1934, Karl Brandt tied the knot with a champion swimmer Anni Rehborn. The couple was blessed with a son Karl Adolf Brandt a year later.

Karl Brandt died after he was executed by hanging on June 2nd, 1948. He was 44 years at the time of his death.