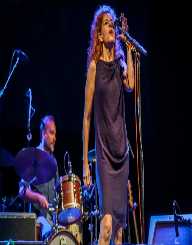 Neko Richelle Case is an American musician, who also composes songs. She was born on 8th of September, 1970 and is popularly recognized as an active member of the Canadian band The New Pornographers. It is a beautiful, lush collaboration and a musical super group which offers a more layered approach to composing and performing their songs, allowing each individuals voice to rise above the gorgeous melodic fray. She is the voice behind the hit song 'Furnace Room Lullaby'.

Case was born in Alexandria Virginia to teenage parents James Bamford Case and Diana Mary Dubbs in 1970. As soon as she started school, her parents broke up, and an archaeologist remarried her mother. Morover, she never had a stable childhood as she would sometimes live with her mother, stepmother or her biological father. Worse still she would spend some holidays with her grandmother. Owing to her stepfather's job, they moved from one city to another though she grew fond of Tacoma, Washington which she refers to date as her hometown. At the age of 15 years, she made up her mind and left home.

Three years later she found solace in bands such as Propane’s and Del Logs where she worked as a drummer performing in several clubs. In an interview, Case said she always thought she would be an artist and would end up as a painter thus she enrolled in Emily Carr Institute of Art and Design in Vancouver. Surprisingly enough since she graduated from the Arts school, she never drew even a single solitary painting instead she did quite a lot of photography and performed in bands.

Initially, she enrolled in 'The New Pornographers band' where she recorded a few vocals for them. Their first album Mass romantic released on 28th November 2000, contained some of the songs Case had composed. One of the songs in the album ''Letter from an occupant'' had mild success which probably resulted in their morale to collaborate years later. Case then worked with different Canadian musicians such as Sadies and Carolyn Mark. Different radio stations and renowned magazines in Canada described Case as an '' honorary Canadian.''

Her first album "The Virginian" of 1997, was solely country music hits. After three years, Case released her second album ''Furnace Room Lullaby’’ that enhanced her musical prowess. Critics depicted her vocals to those legends in the country music field such as Dolly Parton and Tanya Tucker. Two of the songs in the ''The Virginian'' album were used as soundtrack on the films ''The Gift " and ''The Slaughter Rule’ ‘on the 28th of November 2000. A collaborative  live performance of Carolyn Mark, the Canadian singer and Case led to recording and release of the album ''The Other Woman."

She felt that Seattle was not accommodative enough, so she left for Chicago in October 1999. While in Chicago she recorded an extended play "the Canadian Amp" interestingly in her kitchen. The Ep was only available in live performances at the beginning, but with time it was released at the disposal of the public. The EP entailed two of her tracks and covers from the famous Neil Young and Hank Williams.

Her third album ''blacklisted '' was released on 20th August 2004. Various sources have it that during a live performance of the ''Blacklisted'' Case was banned permanently, never to perform on the ''Grand Ole Opry'' for allegedly removing her top right on the stage. Though she adamantly maintains it was not an attempt to add sensual glamour on the performance her fans believe it was intentional. The ''Blacklist'' album is made up of Cases 14 original songs while two of them were covers previously performed by other country music artists. The pornographers were back at it ready to make history once again, unknowingly stronger than the beginning. Case said that she wouldn’t trade being a member of this band for anything. Though working as a group is complicated and messy, it was great and hilarious too for her. They released their second album ''Electric Version '' on 23rd May 2003. Case was the lead singer on most of the songs on the album.

They released their third album ''Twin Cinema’’ after two years that is in 2005. Case missed most of the tour and the live performance of their third album as she needed some time off to work on her solo music career. In 2004 Case released the album ''The Tigers have spoken '' which was a collection of previous shows performed in April the same year.

On 7th March 2006 Case released ''Fox Confessor Brings the flood'' which made it to the ''Best of 2006'' list of songs. It was more successful as it was position one on the Amazon.com music editors selection and most importantly it was position 54 on the ''Billboard 200 charts. The song ''Hold on, Hold on '' in the album which Case said was a story of her own life was included in the ''Easy Come, Easy Go '' song by Marianne Faithful.

On 21st August 2007 their fourth album ''Challengers'' was out in which Cases lead vocals starred the track ''Go places in the album and her backing vocals on the others. Released on 3rd March 2009, the solo album ''Middle Cyclone'' was a complete success, it was the first of all her albums to be on the top 10 Us Billboard Charts furthermore, it was just during the first week after its release. It also became the first album from any independent record companies to secure such a position in the year 2009. This album also earned her several tours in America.

The Pornographers third album ''Together'' was released in 2010 which had Case as a lead vocalist on two tracks. The album ''The Worse Things Get, The Harder I Fight’’ The More I Love You’’, released on 3rd September is entirely different from any other of her albums. There is a considerable feeling of isolation when you listen to the album. She expresses her weak moments with such force and honesty that makes the listener feel relaxed and comfortable.  ''Bill Bruisers '' album released in 2014 was their sixth album and Case had leading roles in some tracks. Their latest and seventh album ''Whiteout conditions '' was published in April 2017.

On 2nd February 2006 Plug independent Music Awards honored Neko Case as the female artist of the year. Her album was ''The Worse Things Get, The Harder I Fight, Fight, The More I Love nominated as the best alternative music in the 56th Grammy Awards in 2014. Her album, ‘Middle Cyclones' was nominated as the Best Recording Package in the 52nd Grammy awards. She was voted as “Sexiest Babe of Indie Rock" in a Playboy.com internet research poll in April 2003.

Neko Case says less about her personal life. She is over 40 years still single and childless. In an interview with Michael Barclay back in 2013, she said that people conclude she is married to music. A statement which she absolutely denies instead she said she is passionate about her music since it the only surefire thing in her life which never disappoints.

Case was featured on Season 29 of the American public television music program recorded live in Austin the ''Austin City Limits. Aditionally, she was on the Hunger Games Soundtrack for the Aqua Teen Hunger Force by Dave Willis and Matt Maiellaro. On 3rd September 2013, Case made several performances from her album. On the 6th February 2014, she sat on the panel on Comedy Central show on midnight. Later on December 2015, Case made an appearance to the BBC Radio where she talked about her career and made a performance of her  album "I'll be around."