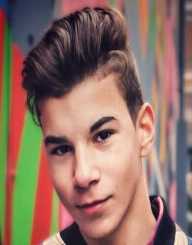 The Life of Harvey Cantwell

Who is Harvey Cantwell?

Harvey Cantwell is an English pop singer who is popular in the Acoustic, Pop and R&B genre. He was on January 28, 1999, in Hartley, England. His father is Leigh Cantwell while his mother is Nicky. The father is a businessman in the printing industry in Kent while his mother is a professional counsellor and works in that capacity at Longfield Academy.  Harvey Cantwell has two brothers named Ollie and Elliott.

Harvey is young yet successful in the music industry. He released a hit song titled "Thank you" while he was still in school. The release of the song catapulted him to fame and stardom in 2014. This led to his many invitations to perform alongside other already established singers in England. Harvey's passion for music started while he was a young boy. He would sing songs in front of his parents and imitate music icon, Michael Jackson. He also began writing songs at an early age. He wrote his first song at the age of 8 years.

Besides music, Harvey Cantwell has tried his hand in media and has worked as a presenter in various shows.

Harvey Cantwell was born on January 28, 1999, in Kent England. He grew up here together with his parents who work in the same region. He started developing an interest in music while he was still young. He occasionally imitated music legends and innocently entertain friends and relatives.

Harvey Cantwell loves interacting with friends and relatives and most of his free time is spent socialising and creating new networks He used to think he was not an up to the mark singer since, in his extended family, nobody had shown interest in music.

Harvey used to write songs even before he recorded. He wrote a song at the age of eight years. It is one of his friends that noted the talent in him. He encouraged him to upload his videos to Facebook. That is when Harvey Cantwell started taking his music career seriously.

Blair Dreelan was the first person to spot the talent that Harvey Cantwell was in possession. Blair was the manager of various groups including Union J and overload. He watched the videos of Harvey and saw rising star in him.

Harvey had recorded a short performance of him singing the cover version of Justin Timberlake's song known as" The mirrors." When he saw the video, Blair Dreelan started acting as his manager immediately. This assured Harvey of his first major event in June 2013. He performed at All Starz Summer Party in Madejski Stadium in Reading, Berkshire. Harvey did not disappoint, and he performed exceptionally well. Other renowned artists present at the gig included Amelia Lily, Union Jessie J, JLS and Lawson

Universal Music consequently signed Harvey Cantwell. He had landed a deal with the company to record his music. It is from that he recorded and released his first song "Thank You" which performed well in the music industry. It was quickly given airplay on the various media station in the country. His YouTube channel has remained one of his primary marketing tools.

Harvey Cantwell is a student. He was enrolled in Leigh Technology Academy. He finds himself in awkward situations where he is supposed to perform in shows during school days. He is however on record thanking his teachers for helping him to catch up on his studies.

Harvey is diligent at school, and he has managed to control his fame. He is social and keeps a valuable company in school according to his teachers.

Harvey Cantwell is a young musician. He has specialised in three genres namely Pop, Acoustic, and R&B. He started showing immense interest in music since he was a young boy. He could copy famous and established musician and present in front of people. This built his self-confidence and eventually his image.

Harvey Cantwell has also publicly said in an interview that he loves designing and he enjoys working on designs of different kinds of stuff.

Harvey Cantwell was little known before 2013. He released his first debut single song "Thank You" which increased his popularity. He released the song through his VEVO channel on YouTube in December 2013. Harvey Cantwell also gained a lot of fame when he became a presenter of a show that aired on BBC TV. The show, "Friday Download" had a massive following in England. He began as a guest speaker for several seasons. He finally became a full presenter in season 9 of the show.

Harvey Cantwell has toured various nations in the United Kingdom including Ireland. He was part of the Roadtrip tour of 2016 together with Rye, Andy, Brooklyn, and Mikey. He was also involved in Magcon Tour Barcelona 2016. Plans are underway to facilitate Harvey Cantwell go for his "Live tour" in 2017. Allstar music is organising the tour.

Harvey Cantwell owns a YouTube channel which has successfully used to popularise himself. He uploads his work there to reach a more prominent clientele. He posted "Simply Amazing "song by Trey Songz as his first cover song on his YouTube channel "Let Me Love You" remains the most viewed video song on his YouTube. The cover song was sung by DJ Snake together with Justin Bieber.

Harvey Cantwell had several people who inspired him to nurture his talent and reach the significant levels he has achieved today.

Justin Timberlake. Harvey loved the singing style of this artist. To a larger extent, Timberlake influenced the genre that Harvey chose to concentrate on. Harvey performed part of his song so well that his current manager decided, immediately after watching the cover song "The Mirror," to work with him. Harvey liked the fact that Timberlake was not only a great singer but also an actor and a dancer.

Nathan Sykes. Harvey Cantwell described meeting this icon as the most impactful experience he ever encountered. He said that he was challenged and encouraged in equal measure.

Other artists that Harvey has met personally include Tori Kelly, Craig David, and Bruno Mars. All these musicians played a significant role in shaping the career path for Harvey Cantwell'When called to collaborate, he would choose to work with Boy Band One, Beyoncé or Craig David

Harvey Cantwell is described as an individual with a natural and unique voice. Rich Castillo, an executive in Universal Music Company, has described Harvey as easy to work with and a young man who does not strain while singing. He said that he has a fantastic voice and behaves more maturely compared to other artists who are older than he is.

Harvey's career set off on the best foot as he interacted with the big boys in the entertainment industry. He, however, remained humble and took it as an opportunity to learn from them. He often performs with established people in the music industry.

Harvey has learned from the company he keeps to remain faithful to himself and not do destructive things to get fame. He has remained humble and down to earth despite his rapidly rising music star.

Harvey Cantwell acknowledges that he is too young and needs guidance from those ahead of him.