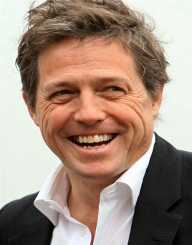 Hugh Grant is an Award-winning actor and film producer with notable performances in ‘Maurice’ in 1987, ‘Four Weddings and a Funeral’ in 1994, ‘Mickey Blue Eyes’ and ‘Notting Hill ‘in 1999.

Hugh Grant is the second born son of Fynvola Susan MacLean and Captain James Murray Grant born in Hammersmith on September 9, 1960. His father ran a carpet business in Chiswick while his mother worked as a school teacher in the State Schools of West London. She died at the age of 65 from pancreatic cancer.

Hugh Grant spent most of his childhood hunting with his grandfather. He started his education at Hogarth Primary school, and then transferred to St. Peter’s Primary School. He later joined an independent prep school called Wetherby School.

In years 1969-1978, he studied at Latymer Upper School where he participated in sports such as rugby, Cricket, and football. He won a Galsworthy Scholarship to New College, Oxford in 1979 where he graduated with 2:1 honours and later joined the Oxford University Dramatic Society.

Hugh Grant started his acting career while at College when he starred in ‘Privilege’ produced by Oxford University Film Foundation in 1982. Notably, Grant had his first leading role in a drama titled, ‘Maurice’ which he co-starred with James Wily. He also played in supporting roles such as ‘The Dawning’ and ‘Remando al Viento’ in 1988.

After his debut in the film, he worked as an assistant at Fulham Football Club and produced radio commercials for the Talkback Productions. He also joined Nottingham Playhouse where he obtained an Equity Card and played a lead role in ‘Twelfth Night.’

Bored with small acting roles, he made his own comedy ‘Jockeys of Norfork’ which he performed alongside Chris Lang and Andy Taylor. The group made their performances at different pubs in London at ‘The George IV ‘in Chiswick, ‘The Kings Head’ in Islington and ‘Canal Café Theatre’ in Little Venice.

Evidently, the performance of ‘Jockeys of Norfork’ at Edinburgh Festival opened doors at the BBC2 TV Show ‘Edinburgh Nights.’ He also made an appearance in plays such as ‘An Inspector Calls,' ‘Lady Windermere's,' ‘Fan’ and ‘Coriolanus.’

Hugh Grant made a cameo appearance in a sport and crime drama titled, ‘The Big Man’ which he played with a Scottish accent in 1990. The following year, he played in an ABC made for television film, ‘Our Sons’ followed by his role in Roman Polanski’s ‘Bitter Moon’ in 1992.

Other works include a Ken Russell’s horror film, ‘The Liar of the White Worm ‘in 1998, a 1996 thriller, ‘Extreme Measures,' ‘The Remains of the Day’ in 1993 and ‘Impromptu’ in 1991. He also performed for a tragicomedy, ‘A Big Adventure’ directed by Mike Newell.

At the age of 32, Hugh Grant played, ‘Four Weddings and a Funeral’ in 1994, which received two Academy Awards nominations, a Golden Globe Awards and a BAFTA Award. During the same period, he signed a two-year contract with Castle Rock Entertainment and became the founder and director of Simian Films Limited. This company produced two Grant Vehicles in 1990’s. However, the company closed its US office in 2002, and Grant resigned in December 2005.

In 2000, he starred as Andrew Sarris in ‘Small Time Crooks’ followed by his role as Daniel Cleaver in ‘Bridget Jones’s Diary’ in 2001.

In 2003, he played in an ensemble comedy, ‘Love Actually’ and reprised his role as Daniel Cleaver in ‘Bridget Jones: The Edge of Reason.' By 2006, he starred as an American Idol alongside Paul Witz in ‘Black Comedy American Dreamz.'

Hugh Grant Starred alongside Drew Barrymore in ‘Music Lyrics’ in 2007 and in ‘Did You Hear about the Morgan’s?’ in 2009. Later in 2015, he played supporting role as Alexander Waverly in ‘The Man from U.N.C.L.E Entertainment Weekly’ followed by his role in ‘Florence Foster Jenkins’ in 2016.

Hugh Grant had a high-profile relationship with actress Elizabeth Hurley for one decade and three years until their separation in May 2000. In 2011, he had a daughter with a Chinese restaurant receptionist, Tinglan Hong.