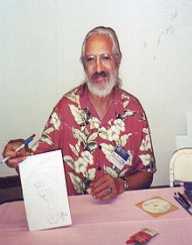 One of America’s most talented and excellent comic book writers and artists, John Lindley Byrne personally created a large number of comic book characters. John has worked with America’s greatest publishers at different points in his writing and drawing career which spans almost four decades and counting.

Besides, John L. Byrne has helped a good number of both the old and new masters to create comic book characters and has always been able to come up with new things that catch the imagination of his readers.

The family, however, lived in West Bromwich, England where young John was raised by his two parents and maternal grandmother. It was here that he got exposed to comics for the first time through a show (The adventure of Superman) presented on television (BBC) as a six-year-old boy. At the age of eight, he alongside his family migrated to Canada.

John L. Byrne was enrolled into a primary school, but his family shifted to Canada. He continued his schooling there. However, he was a below average student. In 1962, he read Fantastic Four 5, a book written by Stan Lee and Jack Kirby. Kirby’s work later had its full effect on Byrne, and he even ended up working with many characters Kirby helped to create.

John L. Byrne was further influenced by Neal Adams (another comic book artist). John Byrne was enrolled in the Alberta College of Art and Design, located in Calgary, Canada, in 1970. It was in this school that he created “Gay Guy” his first comic character, for the college newspaper and also published ‘ACA Comix,’ his first comic book. In 1973, however, he left the institution before completing his studies and never graduated.

Later, he started freelancing for Charlton Comics where he made his debut in color ceramics in 1975 with Rog-2000 story after which he worked on several series including Wheelie and the Chopper Bunch, Emergency!, and Space: 1999.

John L. Byrne also co-created the science-fiction series Doomsday plus 1 with Joe Gill and drew a cover for The Many Ghosts of Doctor Graves, a supernatural anthology, in December 1975.

In 1977, John Lindley Byrne joined Chris Claremont, and the two worked together on the X-men. It sold over half a million issues. He also did the penciling of X-men. Together with its writer

David Michelinie, Byrne co-created Scott Lang in Avengers 181 in March 1979. In 1980, he did the penciling job for The Untold Legend of The Batman, working for DC comics for the first time before penciling for ‘Captain America’ by Roger Stern until March 1981.

By October 1986, he had produced his best in the ‘Fantastic Four and also created the characters such as the ‘Invisible Woman’ and ‘She-Hulk.’ He also worked on the superhero team of ‘Alpha Flight’ for which he created ‘North Star,’ the gay character, and also penciled ‘The Further Adventure of IndianaJones.’ Besides, he drew for five issues of the ‘Incredible Hulk.’

In 1989, he went back to Marvel Comics where he worked on the ‘West Coast Avengers’ and later in the same year he wrote and drew ‘The Sensational She-Hulk’ before working on another new series called ‘Noor, the sub-mariner’ in 1990

John L. Byrne also wrote for ‘Ironman’ from 1990 to 1992 and later in 1994; he once again returned to DC Comics where he wrote the story and drew for yet another ‘superman’ series and the ‘Wonder Woman’ series until 1998. Byrne wrote and penciled for many other series including;

In 1978, John Lindley Byrne received Favorite Comic Book Artist Eagle Award. He won the same award for the second time in 1979. In 1980, he was awarded Inkpot Award.

In 1988, John L. Byrne became a naturalized American citizen. He married Andrea Braun Byrne, an actress, and photographer. Together with Kieron Dwyer, Braun’s son from a previous marriage, the couple lived for fifteen years. (Kieron was thirteen years old at the time of this marriage).

John Lindley Byrne divorced Andrea after 15 years of marriage. He nurtured Dwyer’s talent and inspirations to be a cartoonist, however.