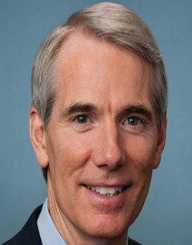 Rob Portman is an American lawyer and politician.

Robert Jones Portman was born in the city of Cincinnati, Ohio, on December 19, 1955. His father, William, owned a forklift dealership. His mother’s name was Joan. He studied at the Cincinnati Country Day School. In 1978, he got a bachelor’s degree in anthropology from Dartmouth College. In 1984, he graduated from the Law School at the University of Michigan.

In 1993, Bill Gradison stepped down from his position in Congress. Rob Portman managed to take his spot. He was re-elected six more times until 2004. During this time, he authored many bills that became laws, such as the expansion of pensions and the balanced budget agreement. He also funded an anti-drug coalition in Cincinnati.

In 2005, he became the U. S. Trade Representative. He traveled in dozens of countries around the globe to arrange trade agreements. In 2006, President George W. Bush appointed Portman as the Director of the Office of Management and Budget. He resigned from the position in 2007, and he returned to Ohio. There, he started working with the law firm of Squire Sanders. He also founded the Future Political Action Committee of Ohio.

Rob Portman was elected to the U. S. Senate in 2011 and 2016. He is part of several Committees, including Finance, Energy and Natural Resources, Homeland Security and Governmental Affairs, and Foreign Relations. He is also part of several caucuses. He spoke at the commencement ceremonies of the University of Cincinnati and Michigan Law School. Portman is a member of the Republican Party, and his overall opinions have been described as moderately conservative.

In 1986, Rob Portman married Jane Dudley, who worked as a staff member in a few political campaigns. They have a daughter named Sally and sons named William and Jed. In 2011, one of his sons came out as gay. That led Portman to change his views on gay marriage and finally accept it, as opposed to being against it in the past.