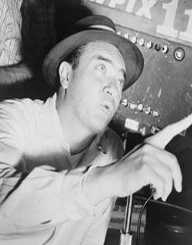 Mel Allen was born Melvin Allen Israel on February 14, 1913, in Birmingham in Alabama. He attended the University of Alabama for his undergraduate studies. He was a member of the Kappa Nu fraternity at the school. In school, he was the announcer for Alabama Crimson Tide Football games.

In 1933, he became a play by play announcer of Birmingham’s radio station WBRC. At the university, he was taken law. In 1937, he graduated from the school. After graduation, he took a vacation to New York. While in New York, he auditioned for the position of staff announcer at the CBS Radio Network. He, later on, was hired by the network.

For his first announcing job, Mel Allen announced the crash of the ‘Hindenburg.’ In 1939, he announced for the Warner Brothers film musical ‘On The Air’ alongside Leith Stevens and the Saturday Night Swing Club. In 1943, Mel changed his name to Melvin Allen legally.

In 1938, Mel Allen's skills were applied as a color commentator for CBS’s Radio Broadcast of the World Series that year. In 1939, he replaced Arch Mc Donald as the voice of the Washington Senators for that year’s season. In the same year, he replaced Garnett Marks on Yankee broadcasts. Later Mc Donald left the scene, and Allen became the lead announcer for both the Yankees and the New York Giants.

In 1941, no sponsors could be found for the teams, so their broadcasts went offline but resumed in 1942. Allen was the lead of announcer of both teams until 1943. In 1943, he joined the United States Army during World War II. He broadcasted on ‘The Army Hour’ and the Armed Forces Radio.

After the war ended, Mel Allen called Yankee games exclusively. He later called twenty-two World Series on Radio and Television. Allen also called twenty-four All-Star Games. In 1952, he was spoofed in ‘Mad’ the satirical comic book. Allen’s image was licensed by Standard Comics for the comic ‘Mel Allen’s Sports Comics’ series, that is, between 1949 and 1950. Some of Allen’s catchphrases included ‘Hello, there everybody!’, ‘How a-bout that?’ and ‘He took a good cut’ among others. In 1963, Allen lost his voice in the last game of the 1963 World Series.

In college football bowl games Allen called 2 Orange Bowls, 2 Sugar Bowls, and 14 Rose Bowls. He also served as a play by play announcer for the Washington Redskins in the National Football League. In 1960, he was a play by play announcer for the New York Giants on WCBS-AM. He hosted ‘Jackpot Bowling’ on NBC when Leo Durocher left to return to major league baseball coaching.

In 1964, Mel Allen was fired by the Yankees and was replaced by Joe Garagiola. In 1965, he became a partner to Merle Harmon for the Milwaukee Braves Games. In 1968, he worked Cleveland Indians games on television. The Yankees in this period also brought him back at times to emcee the special Yankee Stadium ceremonies. In 1976, he returned to the Yankees as a pre and post host for the cable telecasts with John Sterling. He later started calling play by play. Later on, he became the host of the highlights show ‘This Week in Baseball.’ He hosted the show from 1977 till his death in 1996.

Allen also recorded play by play for computer games such as ‘Tony La Russa Baseball’ and ‘Old Time Baseball.’ He made cameo appearances in films such as ‘Needful Things’ and ‘The Naked Gun.’

Mel Allen never married in his life and hence he did not have children. He died on June 16, 1996, of heart failure. His remains were buried at Temple Beth El Cemetery in Connecticut. He died at the age of eighty-three.