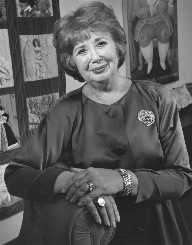 Beverly Sills was an opera soprano from the United States.  Beverly Sills dedicated her life to the world of opera.

Beverly Sills was born on May 25, 1929, in Brooklyn, New York.  Her name at birth was Belle Miriam Silverman.  Her father Morris was an insurance broker while her mother Shirley Bahn was a musician.

Both of her parents were Jewish immigrants from the Ukraine and Romania. Beverly Sills was known as Bubbles by her friends.

At the age of seven, she was taking singing lessons.  The short film Uncle Sol Solves It in 1938 was just the first of her acting credits.  It was at this time that she started using the stage name, Beverly Sills.  Beverly Sills continued appearing on some radio programs in the 1930s.

In San Francisco in 1953, Beverly Sills portrayed Helen of Troy and Donna Elvira.  In her return to New York, Beverly Sills sang at the New Your City Opera in Die Fledermaus.  In the premiere of The Ballad of Baby Doe in 1958, she was the title character.

While living near Boston, Beverly Beverly Sills performed with the Opera Company of Boston.  She sang as Manon, the title role of the opera by Jules Massenet.  This role became her signature role. Beverly Sills continued to rise into stardom with major opera roles in the 1960s and 1970s.  Beverly Sills became known as America's Queen of Opera according to the 1971 Time magazine cover.

Beverly Sills focused her schedule more to the venues in the United States, but Beverly Sills did travel to some of the top opera houses in the world in London, Paris, Milan, Venice, Vienna, Buenos Aires, Lima, and Mexico City.  Her debut at the Metropolitan Opera in 1975 in The Siege of Corinth was well received.

Beverly Sills also made appearances on the talk show circuit and even hosted her talk show called Lifestyles with Beverly Sills for two years. Beverly Sills also appeared on The Muppet Show. On her 50th birthday, Gian Carlo Menotti's opera La Loca was a gift commissioned in her honor.  It was written for her vocals, and it would be her last role before retiring.

In 1956, Beverly Sills married journalist Peter Greenough.  The couple had two children.  Her daughter Meredith was profoundly deaf and diagnosed with multiple sclerosis. Her son Peter, Jr. was born with severe mental disabilities.  Beverly Sills continued to perform, but not on as strict of a schedule.  The family moved near Boston, Massachusetts in 1962.

Beverly Sills died on July 2, 2007, at the age of 78.  The cause of death was complications from lung cancer.

Beverly Sills was diagnosed with ovarian cancer in 1974.  Beverly Sills underwent surgery which was successful.  She later died of lung cancer.

Beverly Sills was active in charity work for the arts, but she was also involved in organizations for children.  One such charity was the March of Dimes.

Beverly Sills was the national chair for the Mothers' March on Birth Defects.  Beverly Sills has been recognized for her charitable and humanitarian works with awards including:

Opera soprano in roles such as: