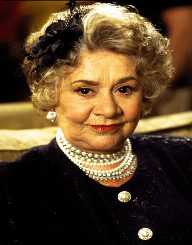 Joan Anne Plowright, Baroness Olivier, is a distinguished, retired English Actress from England whose Career on stage and screen spun over six decades. She is one of the only four actresses who has won two Golden Globe Awards in the same year.

Though having a distinguished career of her own on stage and screen, she is also best remembered as the third wife and widow of Laurence Olivier, a great actor in the 20th century.

Joan Plowright was born on October 28, 1929, in Brigg, Lincolnshire, England. She is the daughter of Daisy Margaret and William Ernest Plowright a journalist and newspaper editor.

After graduating high school, she returned to her theater studies with a spell at the Laban Art of Movement Studio in Manchester.

Joan Plowright made her first professional stage debut at Croydon in a 1948 production of "If Four Walls Could Talk." In 1954, she made her debut in London in The Duenna. Two years later, she joined the English Stage Company at The Royal Court Theater.

She appeared in productions such as "The Crucible," and "The Country Wife."  In the Eugene Lonesco plays, "The Chairs" and "the Lessons" Plowright had dual performance one as an old woman and the other as a 17yr old girl. This demonstrated her versatility as an Actress that brought her wide critical acclaim.

In 1957, Joan Plowright co-starred with her future husband to be Sir Laurence Olivier in a production of John Osborne's The Entertainer. After Olivier's divorce from Vivien Leigh, Plowright and Olivier went to New York where they appeared in Broadway. Plowright appeared in a play A Taste of Honey in 1961.

Despite her early success, in the 1960s, and 70's Joan Plowright put her career on hold where she was focusing her energy on her young family and her famous husband. She divided her time between family duties and occasional stage work where she was working with her husband.

From 1963 onwards, Plowright became a member of the National Theater which was headed by her husband Olivier and she became closely associated with his works. Most of the notable plays Plowright appeared in the 70s are, Saturday, Sunday, Monday (1973), Three Sisters (1974), and Equss (1977).

In the 1980s and ‘90s, her Career experienced a new life after the death of her husband Olivier in 1989. Plowright began appearing more frequently in movies and television throughout the next decade.

Joan Plowright starred in films such as Brimstone and Treacle (1982), The Dressmaker (1988), and her role as an arrogant know-it-all in Enchanted April (1992) which made her win a Golden Globe Award and an Academy Award in 1993.

In 2005, Plowright Starred in Mrs. Palfrey at the Claremont where she was acting like a lonely widow who befriends a young writer.

Other latest films by Joan include a children's movie known as Curious George (2006) where she was the voice of Miss plush bottom and The Spider wick Chronicles (2008). She appeared in the gothic thriller Knife Edge (2009) and the family comedy Goose on the Loose (2011). In 2018, she produced a play known as Nothing Like a Dame.

In 2014, Joan Plowright announced her retirement officially from acting due to her declining eyesight.

Joan Plowright won an amateur theater prize when she was 15years.

In 1961, she won Broadway's Tony Award as the Best Actress for the play " A Taste of Honey."

In 1970, she was appointed as the Commander of the Order of The British Empire (CBE) in the New Year Honors.

In 1986, she was awarded the London Critics Theater Award for Best Actress for her performance in The House of Bernarda Alba.

In 1994, she was Awarded The Women In Film Crystal Award. She also won two BAFTA Awards.

1n 2003, Plowright performed in The Stage Production! (perhaps) in London.

In March 2009, she was appointed the honorary president of The English Stage Company.

In 2004 New Year Honors, she was promoted to Dame Commander of the Order of the British Empire (DBE).

The Plowright Theater in Scunthorpe is named in her honor.

She became ‘Lady Olivier' upon being married by Laurence Olivier.

Her husband was made a life peer in 1970 and Plowright became Baroness Olivier.

In 19th September 1953, Joan Plowright got married to actor Roger Gage and later divorced him in 2nd December 1960.

On 17th March 1961, she married Laurence Olivier, and they were blessed with a son and two daughters who are; Richard Kerr (born on December 1961) an actor and Director, Tamsin Agnes Margaret (born on January 1963), and Julie-Kate born on (July 1966). Both of Their daughters are actresses. The couple remained married until the death of Olivier in 1989.

In October 1964, she suffered a miscarriage.

She is the older sister of David Plowright Who was an executive at Granada Television.