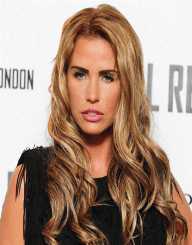 Katie Price was born on May 22, 1978, in Brighton, England, United Kingdom. Her father is Ray Infield, and her mother is Amy Price. She also has one brother, Daniel Price, and one sister, Sophie. Ray left the family a few years after Katie was born. When Katie was ten years old, her mother married a man named Paul Price. After the marriage, Katie adopted her stepfather's last name as her own.

Katie Price first got into modeling when she was 13 years old. She later quit school at age 16 to pursue modeling full time. At this time, she also took up a sort of modeling stage name and went by Jordan. It wasn’t until she was 18 that she became famous in the modeling world after a topless photo of her was put in The Sun, a British newspaper. Afterward, Katie Price went through numerous cosmetic surgeries to look like other models whom she admired.

She got breast implants to make her breasts look larger, and liposuction in her legs and other areas of her body to make her look smaller. Katie Price has also had surgery on her nose and other parts of her face. While in her modeling career, she worked for several magazines, including Esquire, Vogue, Maxim, and FHM. After some years of modeling, she dropped her stage name and went by her real name instead.

Katie Price once auditioned to represent the United Kingdom in the 2005 Eurovision Contest but came in second place behind Javine Hylton. This setback didn’t end her music career. Instead, just a year later, she released her first album with her then husband, Peter Andre, called, A Whole New World. She has not released another album since then.

Being a model has put Katie Price in the middle of the fashion industry, so it came as no surprise when she started to put out her fashion line. Her first line of clothing, well lingerie, was released in 2006. She called it the Katie Price Lingerie Collection. With this collection, she also produced a line of perfumes. In 2008, she moved away from lingerie and even put out an equestrian line of clothing called KP Equestrian.

Katie Price was on the 2015 season of the reality TV show, Celebrity Big Brother. She has also played herself in over 100 other shows and movies, including All Star Family Fortunes, Xpose, and Hell’s Kitchen. Outside of her professional acting career, she gained, even more, fame when she released a sex tape with her once co-star on Celebrity Big Brother, Dane Bowers. The couple did not last long after the tape was made, but it did make Katie Price very wealthy.

Katie Price wrote and released her first autobiography in 2004, titled, Being Jordan. Within the next decade, she released three more autobiographies: A Whole New World, Pushed to the Limit, and You Only Live Once.

Outside of her autobiographies, she also had some ghost-written novels (books that were originally released under another name or written by someone else who worked with her) published. Some of her books include Angel and Sapphire Paradise.

Katie Price had her first child, Harvey Price in 2002. She had a romantic relationship with his father, Dwight Yorke, but never married him. Katie Price was first married to Peter Andre in 2005. The couple had children together, Junior Savva Andreas and Princess Tiaamii Crystal Esther. The couple later divorced in 2009. She remarried in 2010 to Alex Reid. However, the couple got a divorce a year later. They did not have any children together. Katie Prince was last married to 2013 to Kieran Hayler. Together, they have two children together, Jett Riviera and Bunny.