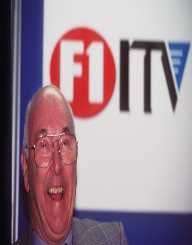 Murray Walker is a British commentator and journalist who is best known for providing the commentary on motorsports for the BBC.

Murray Walker was born on 10 October 1923 in Birmingham, West Midlands, England. He was the son of Elsie Spratt and Graham Walker. Walker’s father worked as a motorcyclist with Norton Motorcycle Company and participated in the famous Isle of Man TT race. Walker and his family repeatedly moved while he was young due to his father’s work with various motorcycle companies. He was the sales and competition director for Rudge-Whitworth in Coventry. Walker received his earliest education at home from a governess. He then attended preparatory schools before going on to Highgate School. During the Second World War, the school was evacuated due to the bombings in London.

Murray Walker was later conscripted into the armed forces. He wished to join an armored division but was initially sent to work with the Dunlop Rubber Company. In 1942, he was based with the Royal Armoured Corp. Upon completion of training, he served in a Sherman tank in Europe. By the end of the Second World War and leaving the army he had reached the rank of captain. Walker went into advertising and worked with some major brands including, Mars, Dunlop and Opal Fruits. He also had a keen interest in motor racing.

Murray Walker’s first broadcast was commentating on the 1948 Shelsley Walsh Speed Hill Climb, which is the oldest continuously run motor race in the world. The following year he was partnering Max Robertson commentating on various motorsport races. He began commentating on the Isle of Man TT with his father in the 1960s. He also went on to commentate on motocross and rallying from the 1960s onwards. It was his Formula 1 commentary that made him a household name. It was not until the 1970s that the BBC began providing extensive coverage of Formula 1 Grand Prix. Walker became the full-time commentator for the BBC’s Formula 1 coverage in 1978. In 1980 he was partnered with former Formula 1 world champion James Hunt. Initially, the two did not have an amicable relationship, but over time the two became friends and worked together until Hunt’s death in 1993. Jonathan Palmer then replaced Hunt.

Although before Palmer received the job as partner permanently, Murray Walker had also been joined in the box by former champions, Jackie Stewart and Alan Jones. After 1996 ITV gained the British broadcasting rights for Formula 1, Walker joined the channel and commentated with Martin Brundle. Walker announced he would be retiring in 2000 and his last Grand Prix was the 2001 United States Grand Prix. Between 1987 and 1997 Walker also wrote an annual titled, Murray Walker’s Grand Prix Year. Walker continued to intermittently commentate on various motorsports for the BBC on both television and radio.

Murray Walker married his wife Elizabeth in 1959. In 2013, Walker had two major health scares. A fall while on holiday shattered his pelvis. He also was diagnosed with lymphatic system cancer. He underwent chemotherapy, and it was quickly announced that it had been a success.