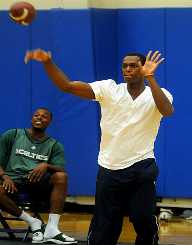 Rajon Rondo was born on February 22nd, 1986 in Kentucky, Louisville, United States. He is an American basketball player and is to be remembered for leading the Boston Celtics to NBA championships back in 2008. His profession as a basketball player initially began with the Boston Celtics team. His coach criticized him for his stubborn nature. In spite of this, Rondo managed to prove his worth to the side and his profession. He became successful and earned himself a position in the NBA All-Rookie second team.

Rajon Pierre Rondo is the son of Amber Rondo. Rajon Rondo did not have time to associate with his father as he left the family when he was still young. Rondo has three other siblings: Anton, William, and Dymon.

With his father not in the picture, Amber Rondo, his mother, had to work up to three shifts for the entire family to survive. She worked the third shift in a tobacco company called Phillip Morris USA. At first, Rondo had shown interest in playing football. His mother thought otherwise as she found it fair that basketball was to fit his skinny body and height.

Later on, after Rajon Rondo was sure of playing basketball, he attended Eastern High School in Louisville. He spent three years here. While he was still a junior, he had averaged over 27 points per game. He also led his team to the high school championships, i.e., Louisville Invitation Tournament.

Rondo did his best during his senior year at Oak Hill Academy. While studying as a senior here, he averaged 21 points per game. He set records for his school for the highest number of assists. In 2004, Rondo was named a McDonald’s All-American for that year. After high school, the young basketball star joined Kentucky University.

At the university, things went up a higher notch as Rajon Rondo upped his game. Right from the time he was a freshman, he broke the school record by having 87 steals during the first season. It is from this album that he made it into the All-Freshman Team that year. In fact, he had a significant impact on Kentucky University as he later dedicated himself to winning trophies for the school.

Often, Rondo did not like the way his coach, Tubby Smith slowed down the game. It is for this reason that the head coach found him as really stubborn. In spite of this, his height advantage and long arms made him gain recognition as a rising talent. In 2006, the Phoenix Suns selected Rondo as their number 21 pick during an NBA Draft. Shortly after, he was traded to Boston Celtics.

Career with the Celts

Rondo’s professional career with the Celtics began with him playing 3rd-string point guard. Just like his former coaches would experience, Doc Rivers, Celtic head coach, found Rajon Rondo to be quite stubborn. However, sooner or later, he saw the positive side of him and that was his competitive nature. Rondo’s style of play was exceptional, and he made it to the NBA All-Rookie Second Team.

The 2007-2008 season was a major success not only for Rondo but also for the Boston Celtics team. It is during this season that Rondo managed to play as a starting lineup. Additionally, he played alongside All-Stars such as Ray Allen, Paul Pierce, and Kevin Garnett. Rajon Rondo's gameplay was consistent, and it brought significant success to the team. The Celtics went to win 66 games which was a record for the team. Moreover, they won the NBA Championships after beating Los Angeles Lakers.

Rajon Rondo was in the NBA All-Star team for four years in a row since 2010 to 2013. In 2012, he had also been awarded for being named part of All-NBA Team that season.

Rajon Rondo married Ashley Bachelor who was a schoolmate while he was at the University of Kentucky. Rondo maintains close relations with mother and his other siblings.