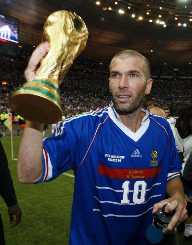 French football player Zinedine Yazid Zidane was born on June 23, 1972, in Marseille. His parents emigrated to Paris in 1953 from Algeria, before war broke out in the country. The family had little work in Paris, and they moved to Marseille. Zidane is the youngest of 5 children. His father was working three jobs, and his mother was a housewife. They lived in a neighborhood with very high crime and unemployment rates.

When Zidane was five years old, he was introduced to football, by playing in the local plaza. When he was ten years old, Zidane joined the junior team of a local club in Castellane – US Saint-Henri. After a year and a half, he joined SO Septemes-Les-Vallons. He stayed with the team until 14 years of age. He then went to a three-day training camp run by the French Football Federation, where AS Cannes spotted him.

Zinedine Zidane started his club career with AS Cannes. He was meant to stay only for six weeks but ended up playing for the club for four years. At Cannes, his first coaches noticed that Zidane was sensitive towards people who attacked his race or family. He was aggressive and even punched an opponent who mocked his ghetto origins. His coaches encouraged him to channel his anger in the fame. Zidane’s professional debut was in 1989 match against Nantes. He led the team to a 2-1 win. Zidane later led the team to qualify for the UEFA Cup.

In 1992-93, Zidane went to play for Girondins de Bordeaux. With the club, in 1995, he won the Intertoto Cup. Several teams expressed an interest in hiring Zidane, but they all turned down their offers. Juventus then approached him and went to play for them in the 1996-97 season.

With Juventus, Zinedine Zidane won the 1996-97 Serie A title and 1996 Intercontinental Cup. In the 1997-98 season, the team played in the UEFA Champions League Finals but lost to Real Madrid. In 1998, he was named the FIFA World Player of the Year.

In 2001, Zidane broke a world record fee of 150 million Italian lire (equivalent to 77.5 million euros) to join Real Madrid. His first year with Madrid, Zidane made history by scoring a goal with his weaker foot in the finals against Bayer Leverkusen. The following year, he was again named FIFA World Player of the Year. 2006 was Zidane’s last season with Madrid, where he was the second highest goal scored.

In 2006, Zidane came out of retirement to play for France in 2006 World Cup. The team had a slow start, but they made it to the finals. Zidane was awarded the Golden Ball as the best player of the tournament. He scored the first goal with a penalty kick but was sent off in the 110th minute of the match for head-butting Marco Materazzi on the chest. Italy won 5-3, but Zidane made headlines all over the world.

After earning the red card in World Cup finals, Zinedine Zidane announced that he would not come back to play. He has since played for Real Madrid Veterans team.

In 2009, Zidane was elected to be the advisor for Real Madrid president. Zidane was also appointed Qatar’s 2022 World Cup, bid ambassador. He was successful, and Qatar will host the 2022 championships.

In 2007, Zinedine Zidane played in northern Thailand for the Keuydaroon children’s AIDS charity. The event raised 7,750 dollars, which paid for a building of two schools and 16 houses. He also took part in the 2008 Match Against Poverty in Malaga, Spain. In 2010, he played in the charity event Soccer Aid. Many former footballers also played at the event, as well as several Hollywood stars.

Zidane is UN Goodwill Ambassador since 2001.

Zinedine Zidane met his future wife when he was 17 years old while playing for Cannes. Zidane and Veronique Fernandez married in 1994. The couple has four sons, who are all part of Real Madrid Academy. Zidane is a Muslim, but he has stated that he is not practicing the religion.