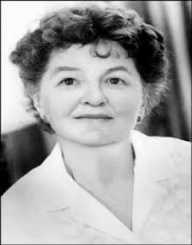 P.L. Travers, the author who created Mary Poppins, was born Helen Lyndon Goff on the 9 August 1899 in Maryborough, Australia. Her father, Robert Goff, was London-born of Irish descent and was a manager with the Australian Joint Stock Bank. Her mother, Margaret Moorehead,  was the sister of the Australian politician Boyd Dunlop Moorehead who at one time was the Premier of Queensland, Australia. She had two younger sisters.

Travers’ father suffered from alcoholism which affected his career, and he was demoted from being a manager to a clerical position.  The family moved from a large comfortable home in Maryborough, Queensland, to Brisbane, Queensland, Ipswich, Queensland and Allora (1905). In 1907, her father died of influenza in Allora and the family then relocated to Bowral in New South Wales. After the death of her husband, Moorhead made a suicide attempt by trying to drown herself.

P.L. Travers was a pupil at the Loreto Girls School in Sydney, where she was a boarder.

To calm her younger sisters during their mother’s near drowning, P.L. Travers told them a story of a magical white horse who came to rescue them. She later wrote that this how she first recognised her gift for storytelling. Travers started writing poetry as a teenager and had published in The Bulletin and other publications. As an actress, she appeared in a number of Shakespearean productions in both Australia and New Zealand as Pamela Lyndon Travers.

After touring Australia and New Zealand with a Shakespearean theatre company, she immigrated to Dublin, Ireland in 1924, intent on pursuing a literary career as Pamela Travers. An introduction to the Irish writer, editor, and poet George William Russell, led to Travers becoming friends with other Irish writers including the poet William Butler Yeats. Through these associations, she became interested in mythology and mysticism.

During the late 1920s, P.L. Travers travelled, visiting Europe and America. She wrote to support herself and also sent money to her mother in Sydney. In the early 1930s, suffering from pleurisy, she was advised by her doctor to live in the country and moved into a cottage, Pound Cottage in Sussex with Madge Burnand.

When her first Mary Poppins novel was published in 1934, dedicated to her mother who had died in 1928, it was under the pen name P.L. Travers. The success of the story led to seven more Mary Poppins book which sold well, and her work was widely translated. Books sales trebled after Walt Disney Studios film Mary Poppins (1964) and have never been out of print. The film starring Julie Andrews became one of the most successful films of all time, won five Oscars and at the time, highest-grossing film ever.

P.L. Travers adopted a child, Camillus Hone, a grandson of Joe Hone biographer to W.B. Yeats. Camillus had a twin brother Anthony who she decided not to adopt. Camillus only discovered he had a twin when he was 17. His older brother was the Irish spy novelist Joseph Hone, and for a time as a young man, Joseph lived with Travers and his brother. Travers never married. She died in 1996, age 96.