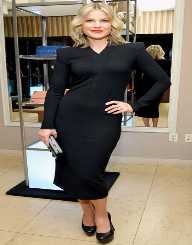 Ali Larter is well-known for her roles in NBC fiction drama, ‘Heroes’, ‘Resident Evil,' and ‘Legally Blonde’ films. Before her acting career, she modeled with the prestigious ‘Ford Modeling Agency’ and portrayed a fictional model in the 1996 Esquire magazine hoax. Other than her modeling and acting careers, she wrote a cookbook, ‘Kitchen Revelry: A Year of Festive Menus from My Home to Yours,' which she released in September 2013.

Ali Larter was born to Margaret and Danforth Larter, in Cherry Hill, New Jersey, on February 28, 1976. Her mother is a realtor while her father is a trucking executive. She enrolled in Carusi Middle School followed by Cherry Hill High School West. However, she never finished her high school studies due to modeling.

Notably, she started modeling at the age of 14 with the Ford Modeling Agency and starred in a Phillies commercial, which led to a modeling contract. At the age of seventeen, her modeling career made her travel and settled in various countries such as Australia, Italy, and Japan. While in Italy, she met Amy Smart, a model, and an aspiring actress, and they became close friends.

Later, they moved to Los Angeles where they took acting classes while sharing an apartment. In November 1996, Ali Larter portrayed a fictional model, Allegra Coleman, in an Esquire Magazine.

Ali Larter started acting professionally in 1997 when she appeared in television programs. For instance, she looked in a television series ‘Suddenly Susan’ in the episode, ‘Brooke Shields’ and ‘Chicago Sons.' She also made appearances in other films such as, ‘Just shoot me,' ‘Chicago Hope,' and ‘Dawson’s Creek.'

In 1999, she performed the film ‘Coming-of-age’ alongside James Van Der Beak and her close friend, Amy Smart. Later she auditioned for ‘Varsity Blues’ where she played a love interest for one of the leading characters as Darcy Sears, an act which earned her $53 million.

During the same period, Ali Larter made appearances to teen comedies such as ‘Giving It Up,' and ‘Drive Me Crazy.' She also starred in the remake of ‘House on Haunted Hill’ a horror film which earned approximately $ 20 million.

In 2000, she starred a supernatural horror film ‘Final Destination’ as Clear Rivers. In the movie, she starred alongside Devon Sawa and Kerr Smith, where they played teenagers who survived a plane crash and were hunted and killed. This film earned approximately $112 million.

In 2001, Ali Larter played a comedy ‘Legally Blonde’ alongside Reese Witherspoon, as Brooke Taylor Windham, a widow accused of murdering her husband. By the end of the film, it had earned $ 141 million becoming Larter's highest gross making film domestically. She also appeared in a western comedy ‘American Outlaws’ where she played Zerelda Mimms co-starring with Collin Farrell and Scott Caan. This movie was not well received, earning $ 13milllion.

Around the same period, she starred in the film, ‘Jay and Silent Bob Strike Back.' She also appeared on Maxim magazine cover and performed in New York City in a stage play ‘The Vagina Monologues.'

During the spring of 2002, Ali Larter moved to New York from Los Angeles because she couldn’t handle the pressure. On her arrival, she resumed her role as Clear Rivers in the second part of the film ‘Final Destination’. This movie earned $ 90 million worldwide. In 2003, she co-produced and starred in the thriller ‘Three Way.' Later in 2005, she made an appearance in a political thriller ‘Confess’ followed by a romantic comedy, ‘A lot Like Love.’

After three years of stay in New York, she decided to move back to Los Angeles in 2005, where she auditioned for a fix ion drama series ‘Heroes.' She got the character of Nike Sanders and Tracy Strauss on the show. As Niki Sanders, she played the role of wife, mother and a former internet stripper who had superpowers. In the character of Tracy, she had superhuman strengths to freeze objects and turn her own body into water.

In 2007, Ali Larter starred alongside Salman Khan in ‘Marigold’ film as an American actress looking for a job in India’s Bollywood. In the same year, she appeared in ‘Resident Evil: Extinction’ as Claire Redfield, who is a leader of a zombie convey, seeking a Safe Haven. She also appeared in the comedy, ‘Homo Erectus.’

Larter took a Screen-Gems thriller ‘Obsessed’ where she starred alongside Beyoncé and Idris Elba.in this film, Larter made an outstanding performance which received critical reviews. The show also earned her a third Teen Choice Award nomination and an MTV Movie Award alongside Beyoncé.

In 2010, Ali Larter resumed her role in ‘Resident Evil: Afterlife’ as Claire Redfield a film that received negative reviews but earned $296 million worldwide. She also appeared in a short film, ‘Lemon Drop’ and participated in a United Nations Conference entitled, ‘Women Deliver.'

Larter hosted 'The Art of Elysium Gala' alongside her husband in 2013. In the same year, she released her cookbook, ‘Kitchen Revelry: A Year of Festive Menus from My Home to Yours’ published by St. Martin’s Press.

After the filming of the show was over, Ali Larter took a career break to focus on her family and resumed in 2014 in a comedy ‘Lovesick.' She also obtained a regular part of ‘Legends’ a TNT drama series, where she played an operative with the FBI. In 2015, she starred in a thriller, ‘The Diabolical’ as Madison, a single mother battling with evil forces in her house.

In 2016, she starred in the final chapter of ‘Resident Evil’ where her role as Claire saves humanity in collaboration with Alice and Red Queen. This film earned $312 million worldwide. In the same year, she also played in a Fox series, ‘Pitch’ as Amelia Slater.

Ali Larter was engaged to her boyfriend, Hayes MacArthur, in December 2007 and married on August 1, 2009, in a private ceremony that took place in Kennebunkport at MacArthur’s estate. The couple has two children, a son, Theodore Hayes MacArthur and a daughter, Vivienne Margaret.