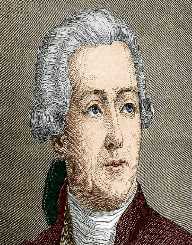 Martin Heinrich Klaproth was born on December 1, 1743, in Wernigerode, Germany.

In his early career, beginning in the late 1750’s, Martin Heinrich Klaproth worked as an assistant at an apothecary. Over the years, he worked his way up in this business before he had gained enough knowledge on the topic and saved up enough funds to open his apothecary around 1980, in Berlin.

In the early 1980’s, Martin Heinrich Klaproth began working at the University of Berlin as a pharmaceutical assessor. Before working here, Klaproth had spent much of his time studying minerals and chemicals in his free time. From his studies, he was able to earn the job at the university. While working at the university, Klaproth also took on teaching jobs around the same time at places like the Prussian Royal Artillery and the Medical-Surgical College, where he worked as a professor and lecturer.

It was in 1789 that Martin Heinrich Klaproth made his biggest discovery, which would later be his claim to fame. He was the first to discover the elements of uranium and zirconium. However, they were not in the metallic state that they are most identifiable in today. He discovered uranium in a glass-like state, mixed with other elements. He was able to isolate the new element in the glass.

In 1795, Martin Heinrich Klaproth came across another mineral, titanium. It had been previously discovered in 1791 by William Gregor, but Klaproth is known for rediscovering the mineral and giving the element its name.

During the 1790’s, Martin Heinrich Klaproth began to climb the career ladder at the University of Berlin. He had started there as an assessor, but he was promoted to the post of councilor in 1797. He was promoted again in 1799 to the post of high councilor. He was promoted once more to the position of the representative of chemistry in 1800. Soon after, he realized he could earn enough money on his educational career alone, and sold his apothecary to focus more on his research.

Martin Heinrich Klaproth was also known to study various other elements during his career. Some of the other elements he studied included chromium, tellurium, and strontium. Part of the reason that he was able to learn more about these various elements (more than other scientists could) was that he used new techniques, like using smaller quantities of elements and accepting that contamination was a possibility and should be accounted for when studying the new elements. He had also continued to study elements past the point that other scientists had stopped, which helped him to discover properties of the elements that others had overlooked.

During his long career, Martin Heinrich Klaproth published hundreds of papers and several textbooks. Some of his most famous publications are listed below.

Martin Heinrich Klaproth was a member of the Royal Society of London and the Institut de France.

Martin Heinrich Klaproth died on January 1, 1817, in Berlin, Germany. He was 73 years old when he passed away.

There is a crater on Earth’s moon called Klaproth which is named after him.