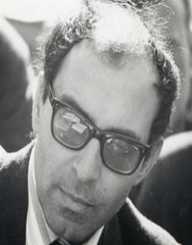 French-Swiss film director and writer Jean-Luc Godard was born on the 3 December 1930 in Paris, France to Swiss-Franco parents. He was raised in Nyon, Switzerland where his father, Paul Godard, who was a physician, relocated the family in 1934. Godard’s mother was Odile Monod who came from a wealthy family, her father Julien was a successful banker and friend of the writer, Paul Valery.

Godard had three siblings, Rachel, Claude, and Veronique. He wrote about his happy childhood in a cultured, well-to-do family. As a child, Godard was good at sport and was a precocious reader. The family remained in Switzerland during World War II.

Jean-Luc Godard was enrolled at the Lycee Buffon in Paris, France and began studying there in 1946 but did not apply himself to his studies as he became obsessed with films. He failed his exam in 1948 and returned home to Switzerland. He enrolled at a school in Lausanne to study for his baccalaureate. Once he had obtained his baccalaureate, Godard enrolled at to Sorbonne where he studied ethnology (1949).

He did not complete his degree; instead, he applied to IDHEC, a film school in Paris, but was rejected. Around this time he became acquainted with Jacques Rivette and Francois Truffaut. The three men used to frequent the cinemas, sometimes seeing as many as four films a day.

Jean-Luc Godard was influenced by Jean-Paul Sartre who was opposed to the American films of the day which were common in Paris after World War II. Sartre saw these films as American cultural imperialism. An opposing view was held by Andre Bazin who advocated objective reality in cinema.

Godard was influenced by both trains of thought as well as the film critic Maurice Scherer. Godard used to attend the Ciné-Club du Quartier Latin where Scherer introduced the films which were followed by debates afterwards. Scherer also produced a magazine La Gazette du cinema to which Godard submitted film reviews.

In his late teens, Jean-Luc Godard was living a Bohemian life in Paris helping Rivette and Rohmer making their first short films. He travelled with his father to the United States and South American in 1951. Returning to Paris, he continued his obsession with the cinema. An early acting appearance was in Rohmer’s short film Presentation. He was also contributing to Cashiers du cinema.

Godard returned to Switzerland at the end of 1952 where he found work in television in Zurich. He was caught stealing money from the company and was jailed. He father arranged for him to be sent to a psychiatric clinic. Once out of the clinic, Godard worked as a labourer on the construction of a dam.

The work on the dam inspired Godard, and he made a film about it, Operation Concrete (1954). He paid someone to film the story, and he did the voice over and editing. The company building the dam purchased the film. Godard went to Geneva where he made a short film, Une Femme coquette.

In 1956, Jean-Luc Godard returned to Paris. His friends had found success with Cahiers du cinema, and the articles and reviews were gaining national attention. Godard began submitting his writing to the publication. After working on various short films, Godard’s first film, which was produced by Georges de Beauregard was Breathless with Jean-Paul Belmondo and Jean Seberg.  Released in 1960, Breathless was a success and won the Jean Vigo Prize and established Godard as a NewWave director.