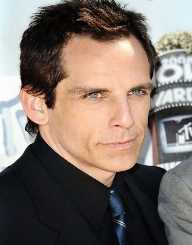 American actor, comedian, writer, and producer Ben Stiller were born on the 30 November 1965 in New York City. His parents Anne Meara and Jerry Stiller were both actors and comedians. His mother was of Irish ancestry and his father Jewish. Meare later converted to Judaism.

After high school graduation, Ben Stiller was a student at the University of California in Los Angeles but did not graduate (1984).

Ben Stiller made his acting debut in The House of Blue Leaves (1985), and his film debut was in Fresh Horses (1987). In the late 1980s, he worked for a short time as a writer on Saturday Night Live (1989). Ben Stiller also developed The Ben Stiller Show in the early 1990s. In 1996 he was in Flirting With Disaster, a comedy. He then acted and directed The Cable Guy (1996). Stillers breakthrough role was There’s Something About Mary (1998).

Ben Stiller went on to have a successful career with films such as Zoolander, The Cable Guy, DodgeBall, Tropic Thunder, and Envy. He has acted in over 130 productions, producer over 40, directed 17 and written 13.

Ben Stiller has won many nominations and awards over the course of his career. He has won three MTV Movie Awards, an Emmy Award for Outstanding Writing for The Ben Stiller Show, a Teen Choice Award for Zoolander, in 2009 he was presented with the MTV Movies Awards MTV Generation Award. Ben Stiller also received hat BAFTA Britannia - the Charlie Chaplin Britannia Award for Excellence in Comedy (2011) and 2014 was nominated for Best Actor at the 40th Saturn Awards for The Secret Life of Walter Mitty.

In 2016 Stiller revealed that he had been treated for prostate cancer. Ben Stiller said that he had made a recovery due to an early detection test and subsequent treatment.

Ben Stiller married Christine Taylor in 2000. Taylor is an actress who appeared in The Brady Bunch Movie (1995) as Marcia. The couple has two children.