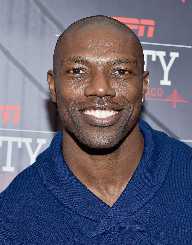 His initials T.O popularly knows him. Terrell Owens is a former football player who served specifically as a wide receiver in National Football League for about 15 seasons. He is highly talented and skilled. He has also known for his on-field performances as well as his controversies. He is a holder of several unbroken records in NFL and very good in what he does. Terrell Owens was agile and speedy during his period in school as a wide receiver. He is very good and notable for his touchdown celebration as well as his exuberant strength. He is highly notorious for his temper and unruly on-field behavior.

Terrell Owens was born to the family of LC Russel and Marilyn Heard. His parents were however separated while he was small. His mother and grandmother practically raised him with his three siblings. He is a lover of football and always idolized Jerry Rice as a child. He schooled at Benjamin Russell High School before enrolling at the University of Tennessee where he got a chance to play at the 1995 NCAA Basketball Tournament.

His career started when he was selected in the 1996 NFL drafts by the San Francisco 49ers. Terrell Owens later became one of the league’s most feared wide receivers during his eight years in San Francisco. A few years later, he had made serious gains in the league. IN 2002, he had 100 catches and won more than 1, 300 receiving yards. He had a very remarkable and highly productive season as he registered 1, 451 receiving yards and thirteen touchdowns at the end of 2000. He helped the San Fransisco to manage a win with a12-4 record.

Terrell Owens was however signed out as an unrestricted free agent in 2004 with the Philadelphia Eagles after numeroustumultuous seasons at San Fransisco. He, however, put up a great game over there having Pro Bowl Numbers. He, however, broke his leg in the late season but returned to his place as a started in Super Bowl XXXIX. His team was however defeated due to his injury by Tom Brady and the New England Patriots. Having he recovered, he had issues with his club. The relationship between him and his club did not go well. The club, however, released him in 2006. Upon his released, he got hooked up with Dallas Cowboys.

He put his talents up, and his ego was displayed in full. These actions of his earned him a jettisoned position with the Dallas. In 2010, Terrell Owens had a decisive career pact with Cincinnati Bengals. He had a successful stay with them and had respectable numbers in the club. While he was there, his reality show put him to the TV lovers in The T.O. Show. Sooner, he was jettisoned and got no single offer from any club.

In 2012, he joined Allen Wranglers for an Indoor Football League. He signed a one-year deal with the Seattle Seahawks in the summer but was releasedbefore the 2012 NFL season. Overall, he ranked as a second all-time in career touchdown receptions and receiving yards at the time of his final game.

Terrell Owens is known to have had a record of six Pro Bowl appearances as well as a record of 1000 catches. He is also the first player to atouchdown in seven straight Monday Night Football games.

He was one of the most talented wide receivers in American football.

Terrell Owens is notable for being the only player in the NFL history to have scored a receiving touchdown against all the 32 teams in NFL. He is also known to be the only one who has scored a touchdownonall the teams in NFL. Apart from this, he holds a record of having six or more touchdowns in 11 consecutive seasons.

Terrell Owens does not play with ladies. He is known to have involved in some women. He fathered several children through his promiscuity as well as his numerous relationship with the ladies. However, he had been accused of not paying attention to his children’s support. He had a setback after suffering from several injuries but had to undergo difficult treatments. He, however, came back stronger and sooner than expected. His notoriety in the field of footballing includes his fights with the manager as well as other players. He is temperamental and very volatile with his behavior.