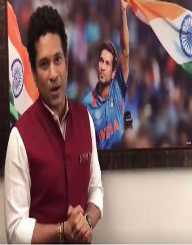 Sachin Tendulkar is regarded as being the central heartbeat of a nation. A whole nation didn’t know what he had in store for everyone. He was destined to go further and beyond his measures. He was the only cricketer who brought cheer to stressful life. He escorted his humor with hope and joy to his fans. It was not just the chosen ones that expressed their enthusiastic praise about Sachin.

Just to name but a few of cricketing legends, Viv Richards and Garry Sobers remained engraved with Tendulkar performance. His divine gift was redefined his industry statistics. In fact, he is the only Cricket player who scored a double-hundred in One Day International (ODIs). He also managed to score 30,000 international runs in both ODIs and Tests. Now you understand why I say he is the inner soul of a nation.

Born on April 24, 1973, Sachin Ramesh Tendulkar studied at Shradashram Vidyamandir High School in Mumbai. He was born in Bombay, Mumbai, India to Rahni, his mother and Ramesh Tendulkar his father. He was named after his father’s favorite music director Sachin Dev Barman in Bollywood. He spent his childhood life in Mumbai, and he loved his decent life. He was given a fair educational option and a potentially bright future in the end. He went to school as an obligation from his parents but not an opportunity. He was known as a bully in his teenage life.

Always driven by his icon John McEnroe, Sachin loved to play tennis. In high school, he was known as the chief troublemaker. His half-brother Ajit came to know his rude behavior. This was when he opted to introduce him to cricket. From the word, go Sachin hated schoolwork and defined it as a waste of time. He came to know his interest was in Cricket more than his studies. He practiced every day as a batsman with his friends and at times alone. One day Ramakant Achrekar; a local cricket coach saw his thirst for cricket talent.

Once Ramakant noticed Sachin talent, he didn’t let him go. He advised him to fathom more to an advanced school that had a high skill of cricket program. The good thing is that he followed his advice with good motive. He moved to his new school where he competed with other students. At first, he was challenged, but he gave himself time to sharpen his cricket skills. He devoted his entire life to cricket.

After school, Sachin Tendulkar would spend countless hours practicing what he was taught. To keep him more motivated Sachin created several betting systems with his friends. He loved to place one rupee on top of the stumps and then choose a player to challenge him. If his opponent won, then he would keep the rupee given. But if he survived the entire program, then he kept it. Sachin’s strategy worked like a charm. By the end of his training sessions, he always had a coin in his pocket. It was not by chance but by his motivation and ability to become the best of all.

In the 1980s, at the age of 16, Sachin Tendulkar began to fly beyond impossibilities. He started to battle out with other external teams such as New Zealand and Pakistan. During his teenage years, he continued to compete in different cricket matches. He became a cricket star in his early 20s.

At 21, Tendulkar scored his first batsman battle against Australia. His career commenced effectively when Sachin scored a record-breaking three centuries on a single tour. He played against the Australia team. Sachin continued to raise the Indian flag higher for over a decade. From 1990 to 2012 he participated in several games. In the process, he made sure that he had set remarkable records. According to the sports commentators, Sachin emerged in a record-breaking player category.

Highly regarded as the world’s ideal cricket player, Sachin Tendulkar has influenced his young stars in the process. It is not by the fame that he became a successful teenager in his early twenties. He turned his life around after several twists and turns. The far he has reached, he can only thank his coaches and his determination. This brings us back to the real-life situation that your focus and positive attitude will determine your leading cause at the end of the day. It doesn’t matter whether you are in the arts or business environment.

Sachin Tendulkar married Anjali who is a pediatrician by profession in 1995 after dating for five years. They were blessed with two children, Sara and Arjun.

The fact will always remain that Sachin Tendulkar became the first player to have scored the 200 runs in just one ODI match. He has also won a MoM Man of The Match 62 times as well as 15 Man of The Series (MoS) awards. From 1994 to 2013; Sachin received numerous awards such as the Bharat Ratna in 2013, World Test XI, Padma Vibhushan, Maharashtra Bhushan and much more.