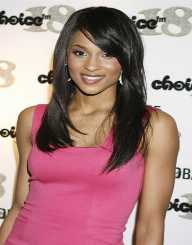 Ciara was born on October, 25th, 1985 in Austin, Texas. She is famous for being a singer, songwriter and an actress. She was born as the only child of her military parents. While she was still in her teen years, she resided in Atlanta where her music career took off. After working with girl-groups things did not work out fine and she decided to refine her songwriting abilities. Fate brought her to Jazze Pha who was a renowned producer at that period. In 2003, she landed on a contract that would change her career. She signed with Atlanta's LaFace Records and the following year her first hit album called Goodies was out.

At the time of Ciara’s birth on October 25th, 1985, she was given the name Ciara Princess Wilson. She was the only daughter of Jackie Harris and Carlton Harris. Both of her parents served in the army. The name Ciara was coined from the Revlon cologne called “Ciara.” Her family later migrated to Atlanta, Georgia when Ciara was in her teenage years. Ciara later partnered with some of her friends to form Hearsay, a girl-group. They worked together for a short period before parting ways due to the differences that came in between them. Regardless of this pitfall, Ciara did not give up. She went on to find herself a songwriting deal. One of her early credits was with the song "Got Me Waiting" sang by Fantasia Barrino for the album called Free Yourself.

Around this period, Ciara crossed paths with Jazze Pha, a famed music producer. This opportunity opened doors for her as she recorded "1, 2 Step," Pick Up the Phone," "Lookin' at You" and "Thug Style" in 2002. All these singles would later be featured on her first album release.

Ciara’s first album called Goodies became an immediate hit reaching three million sales within a short period. As a result of this, she was nominated on four occasions during the 2005 Grammies. In 2006, Ciara released her second album, Ciara: The Evolution. This album also performed well as it was ranked as No. 1 on album charts. It later went on to earn a platinum status owing to its global success. Unfortunately, the third album for Ciara was poorly received. Fantasy Ride- 2009 had only one hit song "Love Sex Magic," where she featured Justin Timberlake.

Ciara has not been away from the public eye with regards to her dating game. She dated Bow Wow for about two years before their relationship ended in 2006. In 2014, she welcomed her firstborn son called Future Zahir. This was the result of the relationship she shared with music rapper Future. Two years later, Ciara tied the knot with Russell Wilson, an NFL quarterback. Ciara has worked in charity programs such as "Just Stand Up!" This was a single meant to raise funds for cancer research. She also featured on Stand Up to Cancer TV special at some point.