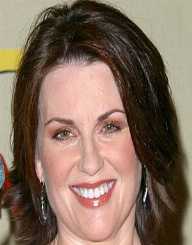 American actress and singer Megan Mullally was born to Martha Palmer and Carter Mullally, Jr. on the 12 November 1958 in Los Angeles, California. She was raised in Oklahoma City. She has no siblings. Her mother was a model and her father an actor who appeared in the television series Dallas (1978-1991)  as well as the Twilight Zone (1958).

Megan Mullally was a pupil at Casady School, and after graduation, she enrolled at Northwestern University, Evanston, Illinois. At university, she studied acting and literature. She is also a trained ballet dancer and singer.

During her time at university, she developed an interest in acting and eventually left university to concentrate on an acting career. Megan Mullally moved to Hollywood in the mid-1980s. Her first appearance in a television series was The Ellen Burstyn Show (1986). She then went on to guest star in various television shows such as Seinfeld, Wings, Mad About You, Caroline in the City and Frasier. She made her first appearance on Broadway in Grease (1994), and in 1995 she co-starred with Matthew Broderick in How to Succeed in  Business Without Really Trying.

Megan Mullally’s television breakthrough came when she was offered the role of Karen Walker in the television sitcom Will & Grace (1998-2017). Between 2006-2007 she had her own talk show, The Megan Mullally Show, hosted Saturday Night Live, guest hosted on David Letterman and hosted the 2006 TV Land Awards. She has continued to guest star in various productions including Parks and Recreation. Megan Mullally also starred in Motherhood (2009), Party Down (2010) and Happy Endings (2011-2012). Recent work includes voice-over work in Sofia the First (2013=2016), Trophy Wife Cricket (2014), You, Me and the Apocalypse (2015) and Life in Pieces Mary-Lynn (2016).

She is also a member of the group, Supreme Music Program. Previously she was in a group with, Nancy and Beth, with  Stephanie Hunt.

In 1979 Megan Mullally was nominated for a Joseph Jefferson Award for an Actress in a Supporting Role in a Musical for Bagtime. She won an Emmy for her role in Will & Grace (1998) in 2000 for outstanding performance by an actress in a supporting comedy role. And in 2005 she won the Women in Film Lucy Award for her work in television.

She has been nominated for seven PrimeTime Emmy Awards and won two: both for best actress in a supporting role for Will & Grace (2000 and 2006). She has had numerous Screen Actors Guild award nominations for her role in Will & Grace and won two. In 2008 Megan Mullally won a Broadway Audience Award for Favorite Featured Actress in a Broadway Musical for Young Frankenstein.

Her first husband was Michael Katcher. Then in 2000 she met and married Nick Offerman.