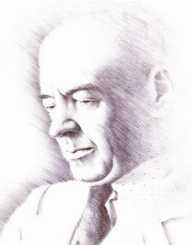 Edgar Rice Burroughs was a famous American writer.  His most famous work was the creation of Tarzan and the Barsoom series.

Edgar Rice Burroughs was born on September 1, 1875, in Chicago, Illinois.  His father Major George Tyler Burroughs served in the Union Army during the Civil War.  His mother was Mary Evaline Zieger Burroughs.

Edgar Rice Burroughs studied at many schools during his childhood.  Some of his schools would close or consolidate because of the contagious diseases that were affecting the lives of the children.

At public and private schools, he learned Greek, Latin, and English composition.  Edgar Rice Burroughs was not a strong student and was known to get into trouble.  After his return from Idaho, his parents sent him to Philips Academy in Andover, Massachusetts. Edgar Rice Burroughs did not last more than a semester because he was expelled for his behavior.

His father continued his goal to send his son to military school.  Edgar Rice Burroughs started the Michigan Military Academy in Orchard Lake in 1892.  Even though he tried to escape the school, he eventually graduated in 1895.

Edgar Rice Burroughs taught geology, calvary, and Gatling gun for a while preparing for the entrance exam for the U.S. Military Academy at West Point.  Unfortunately, Edgar Rice Burroughs failed the exam and was deployed to Fort Grant in the Arizona Territory.

In 1904 Edgar Rice Burroughs was a railroad policeman in Salt Lake City, Utah, then on to other businesses along the way.  His failures to hold a job that satisfied him and provide for his family left him feeling more and more depressed. Edgar Rice Burroughs was inspired to start writing when he was a lead pencil sharpener wholesaler and browsing through pulp fiction magazines.  Under the pen name Norman Bean, Edgar Rice Burroughs sold his first serialized story “A Princess of Mars” in The All-Story magazine in 1912.  It was published under the title “Under the Moons of Mars.”

After his work as a war correspondent, Edgar Rice Burroughs returned to the United States and lived out the rest of his life in Encino, California.

Edgar Rice Burroughs is known for bringing more interest in the genre of science fiction adventure.  He is also known for unique characters such as Tarzan.  Tarzan of the Apes was first on the big screen as a silent film in 1918.

The first sound film based on his character Tarzan was Tarzan the Ape Man released in 1932 starring Johnny Weissmuller in the title role.  Today, Tarzan is one of the most successful fictional characters ever created with over forty films and numerous television episodes both live action and animated.

Between his return from his war correspondent job and his death, Burroughs suffered numerous heart attacks.