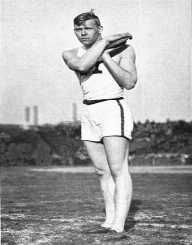 The Unfinished Story of the Valiant Greek Athlete

Konstantinos Tsiklitiras was a Greek Athlete. He is best remembered for winning a Gold Medal in the 1912 Stockholm Olympic Games in the category of the now defunct standing long jump.

Konstantinos “Kostas” Tsiklitiras was born on 30th October 1888. His birthplace is in the Pylos region of Messinia, Greece. He was from a wealthy and distinguished family. Not much information is available about his parents.

Konstantinos Tsiklitiras moved to Athens from Peloponnese, Pylos after completion of his schooling. In Athens, he started studying commerce at the Merchant Academy. But he did not continue his study. Embracing sports as a career option, Kostas started playing soccer and water polo initially. He also became a member of the Panhellenic Gymnastic society. As a member of the society, Kostas practiced as a track and field athlete. Konstantinos was very much fond of playing soccer in his early days. He played football for his old club of Panathinaikos, called the POA. He played mainly as a goalkeeper in this club.

Konstantinos Tsiklitiras, in his formative years, was a track and field athlete. His exploits in this field quickly made him a well-admired field star of Athens.  As a member of the Panhellenic Gymnastics Society, he participated in different field events and jumps. He was the Greek Champion 19 times.

In 1906, Konstantinos Tsiklitiras took part in the Intermediate Olympic Games which was held in Athens. He was just a 17-year-old boy at that time. In 1908 London Olympics, Konstantinos made his first appearance. Subsequently, he won silver medals both in the category of standing long jump and standing high jump.

Emerging as the gold medalist in Olympic Games made him a hero in the eyes of Athenians. Thousands of people gathered at the city center to welcome the champion. They celebrated his victory by lifting him up in their arms and carried him from the Omonoia Square to Panhellenios where his sporting club was located. Konstantinos Tsiklitiras was gifted a golden watch by the members of his association. The watch was more special as it had the date of his victory engraved on it. Kostas was also offered a post at the Bank of Athens. The Greek champion willingly accepted the offer.

In 1913 his career in sports came to a sudden stop when he voluntarily decided to participate in the First Balkan Wars. Konstantinos Tsiklitiras was commissioned as a sergeant in the Greek Army and fought at the battle of Bizani. He did have the option of avoiding the conscription in the war. But he insisted on fighting for the country.

Konstantinos Tsiklitiras contracted Meningitis during fighting for the Greek Army in the First Balkan Wars. He died due to Meningitis on February 10, 1913. He was only 24 years of age when he died.

His original family home in Peloponnesos, Pylos has been transformed into a Museum. The Museum highlighted his athletic achievements. A towering marble statue of Konstantinos is adorned in front of the Museum.