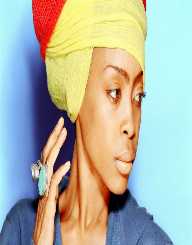 Erica Abi Wright was born on February 26, 1971, in Dallas, Texas. When she and her brother and sister were still young, their father deserted the family, so their mother raised them alone. Her mother worked as an actress in the theater.  Erykah Badu was influenced by her mother and first performed on stage when she was four years old, at the Dallas Theater Center. When she was 14 years old, Badu was already performing on the local radio stations. During this time she also changed her name to Erykah, since she believed that “Erika” is a slave name, and adopted the surname Badu after her favorite jazz scat sound.

Badu graduated from Booker T. Washington High School for the Performing and Visual Arts. After graduation, she went to study theater art at Grambling State University but left her studies in 1993 to focus on music full time. Badu had several minimum wage jobs that supported her, like teaching drama. Badu was working with her cousin on a demo, a 19-song album called Country Cousins. The record attracted the attention of Kedar Massenburg, who set up Badu to record with D’Angelo. Their song “Your Precious Love” eventually secured her a deal with Universal Records.

In 1997, Badu’s debut album Baduism was released. It was a critical and commercial success and debuted on Billboard chart in number one place. The success of the album helped to establish Badu as one of the emerging talents of neo-soul music. Baduism became a three-time platinum-certified album. The albums lead single “On & On” won the Grammy Award for Best Female R&B Vocal Performance, and the album won the Best R&B album. After the success of her first album, she recorder her live performance- Live, which was released in 1997. She released the album just after the birth of her first son.

Badu takes off some time from her music career to raise her child. In 2000, she returned to the music scene with a new album Mama’s Gun. The album was well received, however, did not chart as well as her first record. In 2001, she embarked on the Mama’s Gun World Tour. Her next album was released in 2003, called Worldwide Underground.

In 2006, Erykah Badu received a computer as a Christmas gift and began recording various backing tracks for songs. She released her fourth studio album in 2007- New Amerykah Part One. The lead single “Honey” peaked at No. 88 on the US Billboard Hot 100 list. The album received critical acclaim and sold 125,000 copies in its first week. In 2008, she embarked on The Vortex Tour to support her album.

New Amerykah Part Two was released in 2010 and met general acclaim from music critics. Erykah Badu made several appearances on television shows to promote her album. She shot a video for her song “Window Seat” at the Dealey Plaza in Dallas, where President John F. Kennedy was assassinated. In the video, she was walking along the sidewalk stripping her clothes.

In 2013, Erykah Badu announced a new project and meanwhile performed in Dallas, Los Angeles and other cities around the United States. in 2015, she released a mixtape But You Caint Use My Phone. The tape was released exclusively through Apple Music and marked her first release under her record label Control Freaq. In 2016, Badu performed at The Bomb Factory, holding her annual birthday-bash concert Still Boomin.

Besides her musical career, Badu has also tried out her talent in acting. Her first on-screen performance was in the 1998 film Blues Brothers 2000. The following year she starred in The Cider House Rules. For her performance, Badu won the 2000 Black Reel Award for best-supporting actress and nominations from the Screen Actors Guild Awards. She next starred in the 2004 movie House of D and the following year, Before The Music Dies. In 2008, Badu became the face of Tom Ford White Patchouli fragrance.

Erykah Badu has been a vegetarian for over 20 years and in 2006 became a vegan. In 1995, Badu began dating Andre 3000 from the band OutKast. She and Andre had a son Severn Sirius Benjamin. They parted their ways in 1999. OutKast song “Ms. Jackson” was inspired by their relationship.

In 2000, Badu became involved with Soulguarian Common, but the relationship ended in 2002. Soon after she started dating West Coast rapper The D.O.C. and gave birth to their daughter Puma Sabti Curry in 2004. However, the couple split out not long after. In 2009, Badu had her third child Mars Merkaba Thedford from her boyfriend, Jay Electronica.