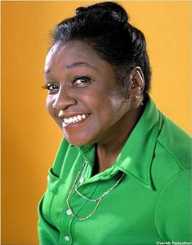 Isabel Sanford was a famous actress from America. She won the hearts of millions through her character Louise “Weezy” Jefferson in the popular sitcom All in the Family and later in The Jeffersons.

Isabel Sanford also acted in films, and her performances were widely acclaimed. She was the first Black American woman to win an Outstanding Lead Actress in a Comedy Series award.

Isabel Sanford was born on August 29, 1917. Her birthplace is New York. Her star sign was Virgo. Sanford’s real name was Eloise Gwendolyn Sanford. While growing up, Sanford always dreamed to become an actress.

However, her mother Josephine was very religious and felt that theatre degrades people morally. Isabel fought her mother’s objections to pursue her dreams. Her acting career began with theatre.

Isabel Sanford’s acting career began with local clubs and some performances at the Apollo theatre. She struggled to make a presence early on. One of her first major roles came in 1965. She was given a support role in The Amen Corner in 1965.

This was the push that Isabel Sanford needed in her career. Her solid performance as Sister Moore earned her the role of Tillie – the housekeeper in the film Guess Who’s Coming to Dinner? The film was based on an interracial relationship between a white female and a black male and was quite successful.

Isabel Sanford found more success as a TV actress. Her first few roles included guest appearances in Bewitched, The Mod Squad, and The Carol Burnett Show. She then appeared in All in the Family as Louise Jefferson. The show became a massive hit and led to a spinoff titled The Jeffersons. The Jeffersons was a breakthrough in Sanford’s career. The show ran for 11 seasons and discussed social issues such as racism along with comedy. The show won Sanford an Emmy award and seven nominations.

The Jeffersons reached its climax in 1985. Sanford continued to act after the show ended. She took on a variety of roles appearing in both movies as well as television. A few of her guest appearances were in shows like Mike Hammer, Dream On, Living Single, The Fresh Prince of Bel Air and Roseanne.She also made a few cameos in films like Sprung, Mafia! She never retired.

Isabel Sanford’s role as Louise Jefferson earned her seven nominations. She finally won in 1981. She also received a star on the Hollywood Walk of fame in 2004.

Isabel Sanford married in 1945 to William E. Richmond – a house painter. Their marriage didn’t go well, and there were many fights involved. Finally, they divorced in 1960 after 15 years of marriage. They had three children.

Isabel Sanford passed away on July 9, 2004, after struggling from ill health – six months after receiving a star on the Hollywood Walk of Fame. She was 86 years old and lived in Los Angeles. She was survived by her three children – from William Richmond, and her seven grandchildren.