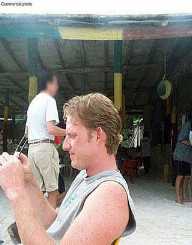 Christian Longo was born 23rd January 1974. He was born in Michigan, in the United States, to Joseph and Joy Longo.

At the age of 19, Christian Longo married Mary Jane. The couple had three children, Madison, Sadie, and Zachery.

On 19th December 2001, the body of four-year-old Zachary was found floating in the river. He had been thrown over the side of a bridge, with a weighted bag attached to him. The body of three-year-old Sadie was found soon after and had met the same fate.

A few days later, Mary Jane, along with two-year-old Madison were found. Their bodies had been stuffed into suitcases and discarded in the bay. A warrant was issued for Christian Longo, and the police chase was on. The warrant charged him with several counts of aggravated murder, and for fleeing unlawfully. Christian Longo had immediately fled the U.S. and headed for Mexico. In late December, he was seen in Cancun. He left the hotel on 7th January 2002, and six days later was captured without a struggle.

While in Mexico he had been on an alcohol-fueled holiday and was sleeping with a woman he met while he was there. Longo also posed as a disgraced reporter, Michael Finkel, from the New York Times. In 2003, Christian Longo was sentenced to death and imprisoned. He is still in the Oregon State Penitentiary on death row, as a moratorium was placed on executions in 2011 and remains in place.

A movie, True Story, was released about Longo.

Sadly, Christian Longo was sick of the “domestic shackles” of family life, but instead of walking away from his family, he felt he had to murder them.