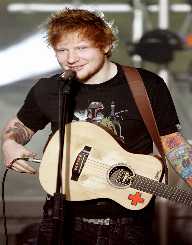 Edward Christopher Sheeran was born on February 17, 1991, in Halifax, West Yorkshire, United Kingdom. He hailed from an Irish ancestry as his paternal grandparents were Irish. Both his parents John and Imogen are London born. His father John was an art curator and a lecturer. His mother Imogen was a cultural publicist and a jewelry designer. He is the second and youngest son of his parents. Ed's older brother is Matthew, who later became a composer.

Sheeran was fortunate enough to be a spectator to a Damien Rice show in Ireland, where he went with his father at the age of 11. His parents ran an independent art consultancy firm, Sheeran Lock, from 1990 to 2010. The job involved frequent traveling between their residence and London. Thus, Edward spent the weekends traveling with his family, while playing music. He has an early influence on music in the form of music records of Bob Dylan and Eric Clapton.

Ed Sheeran was introduced to the world of music early on by Van Morrison's studio album ‘Irish Heartbeat,’ which was the primary source of inspiration for music to him and was a prime factor that led to his decision of pursuing music as a future career choice. Besides, he was also greatly influenced and inspired by the likes of The Beatles, Nizlopi, and Eminem among other musical greats. His father John also took an active interest in shaping and encouraging his musical career. He took young Edward to many live concerts like Eric Clapton at the Royal Albert Hall, Paul McCartney in Birmingham and of course Bob Dylan.

Ed Sheeran started his professional singing career in 2004 when he released his first collection of works titled ‘Spinning Man.’ Before the release of this collection, he released his first official EP, ‘The Orange Room’ at the age of 14. He developed a friendship with fellow English singer Passenger since the age of 15, and both of them played on the same gig in Cambridge. He moved to the big city of London shortly afterwards with the hope of finding more concerts in the sprawling city.

Soon, Ed Sheeran found himself completely immersed in the local singer-songwriter circuit busy playing and recording his songs. In 2006, he released a self-titled record and in 2007 an album titled ‘Want Some?’. As his popularity increased manifold within a very short time, Sheeran played more than 300 live shows during the year 2009 and also released an EP, ‘You Need Me.’

In 2008, Ed Sheeran appeared for an audition for the ITV series, ‘Britannia High.’ During the same time, he started opening for some established and reputed acts, such as Nizlopi, the Noisettes and Jay Sean. He entered into a collaboration with English songwriter and musician Leddra Chapman, including CeeLo Green's "Fuck You." In the autumn of 2009, he spent some time studying music at the Academy of Contemporary Music (ACM) in Guildford, Surrey as an undergraduate student.

In April 2010, Ed Sheeran met with the famous American actor and comedian Jamie Foxx while performing at a poetry night in Los Angeles. Foxx was quite impressed with his performance and allowed Sheeran to use his recording studio. He self-released two other EPs in 2010, ‘Ed Sheeran: Live at the Bedford’ and ‘Songs I Wrote with Amy.’ Gradually, his popularity and fan base grew as he was being seen by more people over the internet through YouTube. He released another independent EP, ‘No. 5 Collaborations Project’ on January 8, 2011. With the release of this EP, Sheeran was able to garner mainstream music attention without any sponsorship or label, and his record sold more than 7000 copies in the first week of its release.

Ed Sheeran made an appearance on the TV Music Show ‘Later... with Jools Holland’, where he performed his debut single "The A-Team." The single was released as a digital download in the United Kingdom six weeks later. The single entered the UK Singles Chart at number three and sold over 58000 copies in the first week of its release. It became the best-selling debut single and the overall eighth best-selling single of 2011. Besides selling over 801000 copies worldwide, the lead single became a top ten hit in Germany, Japan, Ireland, Australia, Norway, Netherlands, Luxembourg and New Zealand.

Ed Sheeran's second single "You Need Me; I Don't Need You" was released in August 2011 and peaked at number four on the UK Singles Chart. His third single "Lego House" reached the top ten in Ireland, Scotland, Australia and New Zealand and also entered the top 50 in several other countries.

His international recognition rose to newer heights after the release of his album ‘+’ (plus) on September 12, 2011. The album reached the No. 1 position in several countries and sold 1,021,072 copies in the United Kingdom within six months of its release. It became the second best-selling debut album and had been certified platinum six times by the British Phonographic Industry.

Ed Sheeran's second album ‘x’ (multiply) was released on 23 June 2014 featuring tracks produced by the well-known American record producer Rick Rubin and professional rapper Benny Blanco. The album peaked at No.1 both in the UK Albums Chart as well as US Billboard 200. The album featured three top ten singles, "Don't," "Photograph" and "Thinking Out Loud." The latter single won the Grammy Award for Song of the Year and Best Pop Solo Performance in 2016.

In January 2017, Sheeran released two singles from his proposed album ‘Divided (÷).’ The singles "Shape of You" and “Castle on the Hill” debuted at number 1 and six respectively on the Billboard Hot 100. He released the album in March 2017 creating a record for first-day album streams with 56.7 million listens in 24 hours.

At the age of 26, Ed Sheeran is still unmarried. In 2012, he dated Scottish singer and songwriter Nina Nesbitt. They broke up in 2014 and Sheeran began dating Athina Andrelos until February 2015. He started dating his high school friend Cherry Seaborn after February 2015.