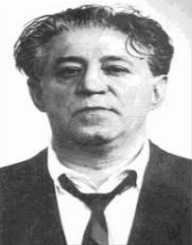 Sam DeStefano popularly known as ‘Mad Sam’ was born on September 13, 1909, in Streator, Illinois, United States. He was an Italian American thug who hit the records of history as a Chicago loan shark who tortured and killed his debtors or those who defied his orders. He was also imprisoned on accounts of rape and bank robbery.

He was released in 1944 but again landed in prison for a crime in forgery. It is in prison where he began his loan-sharking business alongside other notorious inmates like Tony Spilotro. Together with Tony, he killed Leo Foreman in 1963. He was assassinated on April 14, 1973, in Chicago.

Samuel DeStefano was born on September 13, 1909, to Italian American parents Samuel DeStefano, Sr., and Rosalie DeStefano. He was born in Streator, Illinois, United States. His father died in 1942 and his mother in October 1960. He began a life of crime from an early age and had faced several arrests including being arrested on September 12, 1926, for breaking out of jail.

He was charged in court in In November 1927 for sexually assaulting a seventeen year old alongside his accomplice Ralph Orlando. He was sentenced to three years in prison while Orlando was sentenced to ten years. His sentence was less due to police testimony that they arrived at the scene before he had laid a hand on the girl.

After prison sentence, Samuel DeStefano joined Salvatore "Sam" Giancana’s gang known as the Forty-Two Gang in 1930 where he was involved in gambling and Bootlegging. In 1932, he was severely wounded in a confrontation by policemen while conducting a robbery at a local grocery. In 1933, he was charged with bank robbery in New Lisbon, Wisconsin and was sent to serve forty years in prison.

However, he was released in December 1944 when Governor Julius Heil commuted his jail sentence in December 1942. In 1947, he was again sent to prison for possession of counterfeit sugar ration stamps. He was released later in 1947 and started working as a garbage foreman in Chicago.

In the 1950s, Samuel DeStefano had become one of the most vicious loan shark business operators in Chicago City. He invested in real estate business using the stolen money he had kept from a bank robbery he was involved in years earlier. He was also involved in bribing local aldermen and other politicians using the income he secured from his apartment building. By the mid-1950s, he had become prominent and had influenced many people including city officials, police officers, and even renowned judges.

However, Samuel DeStefano increased his charging rates and would demand high interests from his victims. He would torture victims who did not pay in time and even ended up killing the ones who defied him or as a way to scare his other debtors. In the 1960s, he initiated Tony Spilotro as one of his gang members with whom he later partnered in killing Leo Foreman, in November 1963.

Before which they had engaged in killing two burglars in 1962 who owed Stefano. Foreman had defied Stefano and even sent him out of his office after an altercation. He sought to kill Foreman, but he avoided him by hiding in different locations. However, he caught up with him and tortured him before shooting him in cold blood. On February 22, 1972, he was convicted on a three and a half years sentence.

When Samuel DeStefano came for his first hearing, he appeared to be in a somewhat awkward situation and exhibited weird behaviors including appearing in court wearing pajamas. This kind of behavior raised eyebrows among his other crew members and mobsters and thought that he would endanger and interfere with their operations. He was shot dead on April 14, 1973, in Chicago at his home by his crew members and his body dumped in his garage. He died at the age of sixty three.