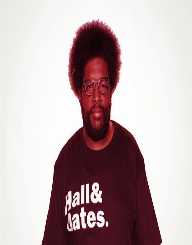 From a young age, it was obvious that Ahmir K. Thompson had a talent for music. He attended the Philadelphia High School for the Creative and Performing arts. While at school, he was friends with Tariq Trotter, who would later go on to form a band with him called the Roots. After graduating from high school, he went on to study music at the Settlement Music School. Soon after, he started his professional music career.

In 1987, the band the Square Roots was formed. It was around this time that Ahmir K. Thompson began to call himself by the stage name Questlove. He would later be more famous for this name than his real name. In the band, Questlove played the drums. The band later changed its name to the Roots. Other members of the band were Tariq Trotter, Malik B, Josh Abrams, and Scott Storch. The band only played together for a short while before Abrams was replaced by Leonard Hubbard.

In 1993, the band released their first album, Organix. It was around this time that the band started to become popular. In the following years, the Roots gained fame and released several more albums. Some of their most famous albums are listed below.

In the early 2000’s, Questlove began to move away from playing music to producing music. He also helped to perform as a drummer for some bands, including The Philadelphia Experiment. He also wrote scores for some movies, played the drums live on various television shows, and even played his music in movies. He also started his own Pandora radio show in 2016.

Questlove began to play music on television in 2004 when he played for Chappelle’s Show. In 2009, he picked up a more permanent gig, playing on Late Night with Jimmy Fallon from 2009 to 2011. Later, he worked with Fallon again when he joined The Tonight Show Starring Jimmy Fallon in 2014. He continued to play on the show to this day. Some of the other shows he has played music for are listed below.

Even though it may seem to have nothing to do with his other pursuits, Questlove also owns his own catering company, which he named after himself: Quest Loves Food. His company serves mostly comfort food. He hopes to one day have food trucks that travel to music festivals all over the country.

With his band, the Roots, Questlove won three Grammys. These include the Best Traditional R&B Vocal Performance for Hang in There (2010), Best R&B Album for Wake Up! (2010), and Best Rap Performance by a Duo or Group for You Got Me (1999).

He has also won another Grammy, not with the Roots for Best Musical Theater Album (Hamilton (Original Broadway Cast Recording))He won the Guldbagge Award for Best Music (The Black Power Mixtape 1967-1975)

Questlove doesn’t only write music; he also writes books! He published his first book, a memoir, in 2013. This memoir was titled Mo’ Meta Blues: The World According to Questlove. He also has two other books: Soul Train: The Music, Dance, and Style of a Generation and Something To Food About Exploring Creativity with Innovative Chefs.