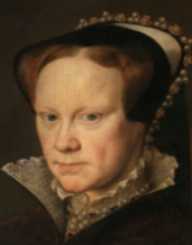 Mary I of England

Mary I of England was born on February 18, 1516. She was the only child of King Henry VIII. She was the Queen of England and Ireland from 1553 until her death in 1558. She married Phillip of Spain to remove her half-sister Elizabeth from the line of succession. She introduced the Roman Catholic faith in England, and she ordered for the murder of Protestants who were not willing to embrace the Roman Catholic faith. Her subjects were not at all pleased with her, and she was referred to as ‘Bloody Mary.’ Upon her death, Mary I was succeeded by her sister Elizabeth as the Queen of England as she died without any children.

Mary I was born on February 18, 1516, at Palace of Placentia, Greenwich, London. She was born to King Henry VIII and Queen Catherine of Aragon. She was the only child of the couple who had survived infancy. After three days, she was baptized as a Catholic. Her mother Queen Catherine taught her. She was well versed in the French, Spanish, Latin and Greek languages. She was also outstanding in music and dance. In 1525, she was sent to Wales to preside over the Council of Wales and the Marches.

In 1528, Mary I of England returned to London. King Henry VIII and Queen Catherine had so many problems that led to Queen Catherine being chased out of the palace. These situations affected Mary, and at a young age, she was pushed into stress and depression. Her health was not good during her adolescent period.

Mary’s parents separated because her mother could not produce a male child who would succeed King Henry VIII when he died. In 1533, King Henry married Anne Boleyn. This led to the King’s first marriage being declared void and Mary being branded an illegitimate child. She was no longer referred to as Princess Mary but The Lady Mary. Mary did not accept her father’s marriage to Anne. She did not consider Anne as the Queen of England. Her refusal to accept Anne as the Queen strained her relationship with her father.

Mary’s health started deteriorating because she was stressed and depressed. Her father went to the extent of restricting her movement. In 1536, Queen Anne was beheaded and the status of her daughter, Elizabeth, was changed from Princess Elizabeth to The Lady Elizabeth. King Henry VIII went ahead to marry a third wife, Jane Seymour. Queen Jane requested King Henry to reconcile with his daughters, Mary and Elizabeth. Mary I and Elizabeth were accepted back into the court, and they were granted household. After Mary was admitted back into the court, a rebellion broke out in North England with subjects demanding that Mary is made the legitimate heir of King Henry VIII. The person who led the uprising was known as, Lord Hussey; he was Mary’s former Chamberlain.

Queen Jane gave King Henry VIII a son called Edward. In 1537, Queen Jane died and Mary I became the Godmother to Prince Edward. King Henry went ahead to marry the fourth and fifth wives, Anne and Catherine Howard respectively. In 1543, he married his sixth wife, Catherine Parr, who brought Mary and Elizabeth into the line of succession through the passing of the Act of Succession of 1544. When King Henry died, Prince Edward ascended the throne. He was a Protestant, and so Protestantism reigned throughout England.

Mary I was not happy with his brother because they had religious differences; Mary was a staunch Roman Catholic. In 1553, King Edward VI died, and because he feared that Mary would introduce Catholicism in England, he removed Mary and Elizabeth from the line of succession. This he did by naming his cousin Lady Jane Grey as the Queen of England.

Queen Lady Jane Grey was dethroned after only nine days due to the immense support that Mary had from the subjects to become Queen. On August 3, 1553, Mary I became the Queen of England. Mary’s first agenda on the throne was to get a suitable partner so that she can produce children to drop Elizabeth from direct succession. She betrothed Prince Phillip of Spain who was the son of her uncle Holy Emperor Charles V. she was criticized a lot for her decision that the matter led to a parliamentary debate.

The parliament decided that Mary I would marry Prince Phillip only on condition that he would not be involved in certain royal matters. Queen Mary validated the marriage of her parents and abolished the religious laws that were set by King Edward. The English church returned to Roman jurisdiction under her reign. A Heresy Act was passed which provided that people of Protestant faith were either executed by burning or exiled.

Queen Mary and Phillip got married on July 25, 1554, but the marriage brought no benefit to England as Phillip spent most of his time outside England. The marriage led to a lot of disadvantages to England as England’s alliance with Spain prompted England to war with France. In 1558, Queen Mary’s reign was questioned, and subjects protested when Calais (England’s possession of the European Mainland) was taken over by France. Queen Mary’s reign brought a lot of problems in England’s finances and revenue. The weather was always bad as there was a continuous flood that led to floods everywhere. Spending was high in England while imports and taxation were extremely low.

In 1558, Queen Mary’s health got worse, and she succumbed to Influenza epidemic on November 17, 1558. She died at St. James Palace and was buried next to her mother in Westminster Abbey. Her sister, Queen Elizabeth succeeded her on the throne, and she became the Queen of England.