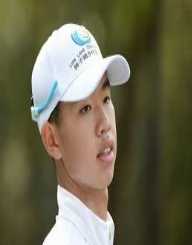 Chinese golfer Guan Tianlang was born on the 25 October 1998 to Hong Yu and Han Wen in Guangzhou, China.

Guan Tianlang is a student at the University of Arizona and is a member of the university’s golf team.

At a young age, Guan Tianlang was taught to play golf by his father. As a junior and amateur golfer, he had a lot of success. He made history by becoming the youngest golfer to win the China Amateur Futures Tour in 2010, the China Amateur Tour in 2011 and the Callaway Junior World Golf Championships: Boys 11-12 Division in 2011.

Guan Tianlang was 13 when he again made history by being the youngest player to participate in the European Tour when he played at the 2012 Volvo China Open.

He won the Asia-Pacific Amateur Championship in Thailand the same year, and in 2013, at the age of 14, he played at the Masters Tournament at the Augusta National Golf Club, Georgia in the USA, again the youngest player to have done so. He finished 12th.