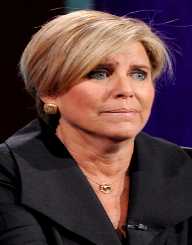 Suze Orman was born on June 5, 1951. She is an American television host, motivational speaker, author, and financial advisor. She is famously known for her show ‘The Suze Orman Show.’ She has written books such as ‘The 9 Steps of Financial Freedom’ among others.

Suze Orman was born Susan Lynn Orman on June 5, 1951, in Chicago, Illinois. She was born into a family that had financial constraints. Her father worked in a chicken factory while her mother was a secretary for a local rabbi. While she was young, she suffered from speech impairment. She attended the University of Illinois where she studied social work. She dropped out of university to go on a tour of America with some of her friends. Suze Orman later became a waitress and worked at the Buttercup Bakery located in California for seven years. Some customers at the bakery assisted her in saving up money to come up with her restaurant as that was her dream.

In 1980, Suze Orman was given a cheque of $2000 by her customer Fred Hasbrook. The money was a contribution to her dream of owning her restaurant one day. Fred also asked other customers to contribute to the cause, and she ended up raising $50,000. She took the money to Merrill Lynch because she did not have any idea of how to manage funds. She ended up losing her money when she was duped by a broker in making easy money. She started training herself in finances and later sued Merrill Lynch because she realized that the broker she dealt with had gone contrary to the provisions of company laws.

Suze Orman was later compensated by the company, and the matter was settled out of court. Suze Orman then joined Prudential Bache Securities after leaving Merrill Lynch. In 1987, she started her own company called ‘Suze Orman Financial Group.’ Her company was located in California. She was the director of the company for ten years. In 1995, she published her book titled ‘You’ve Earned It, Don’t Lose It’ which sold more than sixty thousand copies. In 1997, she published her second book ‘The 9 Steps to Financial Freedom’ which sold more than 2.5 million copies.

Suze Orman became the best selling writer as all her books were successful. She published other books such as ‘The Laws of Money, The Lessons of Life,’ ‘The Courage to Be Rich ’and‘ The Road to Wealth.’ In 2003, she got her own show o CNBC called ‘The Suze Orman Show.’ The show won her a Gracie Allen Award for American Women in Radio and Television Organization. In 2008, she was invited to the Oprah Winfrey Show as she was recognised as one of the most established financial advisors. She became Oprah’s favourite female financial advisor, and so she aired her show on the Oprah Winfrey Network called ‘America’s Money Class with Suze Orman.’ The show was a series that went for six episodes.

In 2009, Suze Orman got an honorary doctorate of humane letters from the University of Illinois at Urbana Champaign.

Suze Orman is a self proclaimed lesbian. In 2010, she married Kathy Travis.