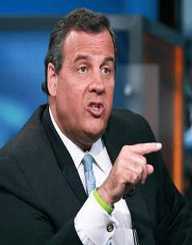 Chris Christie was born on 6th September, 1962, to Wilbur and Sondra Christie. Christie’s father was a certified public accountant, and his mother was a receptionist.

Chris Christie's father was a Republican, his mother a Democrat. By a strange twist of fate, it was his mother who influenced him to become a Republican, not his father. She encouraged him to volunteer for the candidate in 1977 who would become the governor – Tom Kean. Christie had taken an interest in Kean when he heard him speak during his time at high school.

When he graduated in 1987, Chris Christie joined the firm, Dughi, Hewit & Palatucci from Cranford in New Jersey. In 1993 he became a partner. He is a member of the American Bar Association and the New Jersey State Bar Association.

Chris Christie volunteered for President George Bush’s re-election campaign in 1992. During the campaign, he became close friends with Bill Palatucci, who was Bush’s state director. After the campaign, Christie decided to run for office himself. He launched his campaign in 1993, but his opponent questioned whether his petition to be on the ballot was valid, and the protest was upheld.

Chris Christie quite often had controversy surround him during different campaigns. In 1994 he was elected to the Board of Chosen Freeholders in Morris County, who are the legislators. The incumbents he defeated then filed a law suit against him, which was settled out of court.

One of the things he did as a freeholder, was to successfully have the architect sacked who was supposed to be designing a new jail. Christie said the architect was costing the taxpayers too much money. The architect then sued Christie for defamation, but the suit was eventually dropped.

In 1996 Chris Christie announced he would run for a seat in the New Jersey General Assembly. He and his running partner lost. He then sued the those that won, as they had laid false accusations about Christie during the campaign. They settled out of court, the other party admitting fault and apologizing.

In 1998, Chris Christie returned to his legal firm to practice law.

In 2001, George W. Bush appointed Chris Christie to the position of U.S. Attorney for the District of New Jersey.

From 2002 to 2008, Chris Christie served as Chief Federal Law Enforcement Officer in New Jersey. Chris Christie's main priorities upon taking office were terrorism, and public corruption. He worked diligently during his tenure, and had many people convicted, including gang members, and brothel owners that kept Mexican teenagers in captivity.

In 2009, Chris Christie filed to run as governor of New Jersey. He took office in 2010 after defeating his opponents. If nothing else,Chris Christie had strong views on a wide variety of subjects, and worked consistently in office to peel back the red tape and government expenditure, while looking after the citizens.

People obviously thought he did a good job, and he was re-elected in 2010 for his second term as governor. He is due to retire from the position in 2018.

Two of his most senior staff were charged and found guilty in the end, but Chris Christie wasn’t pursued any further.

It was thought in 2012 that Chris Christie might run for president, but in the end, he didn’t. He did, however, announce his presidential campaign in June 2015. He didn’t do at all well in the New Hampshire primaries, and in January 2016, announced he was out of the race.

In February, the same year, he endorsed Donald Trump as the presidential candidate. It was thought by some that Chris Christie would be the co-runner with Trump, but due to the controversy of the George Washington Bridge, and also calls for his impeachment, Trump chose Mike Pence as his running mate. Christie had too much controversy surrounding him.

There were whispers that Chris Christie would be selected for a position on the Trump administration, but Chris Christie announced that he would see out his term as governor, and then move into the private sector.

Chris Christie married Mary Foster in 1986. He had met Foster when he was at the University of Delaware – she was a fellow student.

They have four children, Bridget, Patrick, Sarah, and Andrew.

Under his governance, New Jersey’s economy has been revitalized. His taxation and educational policies in particular, were very popular. He created many jobs for New Jersey, and was also commended for the way his government handled the aftermath of Hurricane Sandy in 2012.