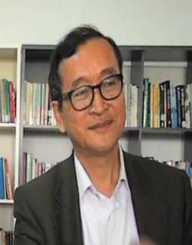 Cambodian politician Sam Rainsy was born in Phnom Penh in 1949. When he was sixteen years old, his father disappeared in what was thought to have been a politically motivated assassination. Rainsy subsequently left Cambodia and settled in France.

After graduating from the Lycee Janson de Sailly high school in Paris, Sam Rainsy studied political science, economics, and accounting at tertiary level in France, graduating in 1979. Later he did an MBA.

Sam Rainsy work as a banker and financier in Paris. Then in 1989, he became Prince Norodom Ranariddh Funcinpec party’s European representative.

In 1992 Sam Rainsy returned to Cambodia, and in 1993 he was elected to parliament as a member for Siem Reap Province. He was appointed Minister of Finance, however, in 1994 he was expelled after a vote of no-confidence. He lost his parliamentary seat and the following year he decided to form his political party, the Khmer Nation Party.

Sam Rainsy was almost assassinated in 1997 when a grenade attack outside the National Assembly killed over a dozen of his supporters during a political rally. At the time he blamed the supporters of Hun Sen of the Cambodian People’s Party for the attack.

In 1998 his party’s name was changed to the Sam Rainsy Party (SRP) and won fourteen percent of the vote which equaled fifteen seats. His party gained twenty-two percent of the vote in 2003 which forced Hun Sen’s party to form a coalition with Funcinpec.

Sam Rainsy faced defamation charges in 2005 and absentia was sentenced to eighteen months in prison. These charges were dropped after a royal pardon by the King at the request of the Prime Minister. Sam Rainsy then returned to Cambodia on 10 February 2006. Political commentators and representatives from various countries all expressed concern that the defamation charges against Rainsy where a ploy by the government to control the opposition.

In the 2008 elections, Rainsy’s party won twenty-six seats, but he was forced to flee Cambodia because new defamation charges were laid against him which included insulting a former foreign minister of Cambodia. After another royal pardon in 2013 Sam Rainsy returned to Cambodia, His party then allied with the Human Rights Party and they merged into the Cambodian National Rescue Party. The Cambodian political crisis thus ended in July 2013 when the CPP and the CNRP reached an agreement. Rainsy became a member of parliament for Kampong Cham. He was in favor of setting up an official opposition with a shadow cabinet, but in November 2015 a warrant for his arrest was issued, and he was removed from the National Assembly by the CPP. On the 11 February 2017, Sam Rainsy resigned from his role as president of the CNRP.

Sam Rainsy married Tioulong Saumura in 1971, and the couple has three children: Patrice, Muriel, and Rachel.