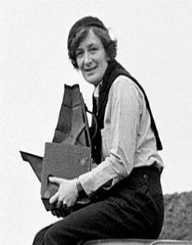 Dorothea Lange was born on May 26, 1895, in Hoboken, New Jersey, U.S. She was an American photographer who captured the Depression-era. In her works, she exhibited the plight of farmers and focused majorly on the unemployed people who were affected by the great depression. She has been celebrated as a very skilled documentary photographer and photojournalist of her time. She received the 20th Century Guggenheim Fellowship in 1940 for her exhibitions and contribution in photography.

Dorothea Margaretta Nutzhorn was born to Heinrich Nutzhorn and Johanna Lange on May 26, 1895. She was born in Hoboken, New Jersey, U.S. Early in life, at the age of 7, she was diagnosed with polio which left her lamed on the right leg. Her father later left them when she was only twelve, which led to her dropping her father’s name Nutzhorn.

Dorothea Lange attended Wadleigh High School For Girls and later joined Columbia University to learn photography. After college, she was able to interact with a number of photographers and even visited several photography studios including Arnold Genthe studio in New York. This gave her much acquaintance with the photography industry and gained much skill.

In 1918, Dorothea Lange ended up in San Francisco after a tour with a friend was short-lived when they were robbed. She started working at a photo supply shop where she made acquaintance with other photographers in San Francisco. She also met an investor who assisted her to come up with her photo studio. The start of this business was a doorway to success, and for fifteen years she was able to fend for herself and her family.

Her primary focus of work was capturing portraits of prominent people including the social elite at San Francisco. In her course of duty, her attention was drawn to something much more than the studio captions. The Great Depression was sweeping across the streets, and there she decided to capture these events.  Her first photographs fascinated the other photographers who found her skills much more advanced. She later got a job at the federal Resettlement Administration (RA).

From 1935 to 1940, Dorothea Lange was capturing the real life of migrant farmers and the exploitation they went through. She portrayed their lives in the jaws of poverty and impoverished state of their homes. Through her documentary, she was able to bring the plight of these unfortunate and poor laborers to the public view.

She produced “Migrant Mother’ in 1960 that gained much acclaim in her era. With the help of her co-worker in San Francisco, the condition and state of the poor migrants was made known to the federal government. The government, in turn, sent food aid to curb starvation and apparent deaths. The other photographs she captured were stacked in the album ‘The Harvest Gypsies’ by John Steinbeck.

Dorothea Lange also worked for the War Relocation Authority (RCA) when she was assigned to do a documentary on the internment of Japanese-Americans after the Pearl Harbor attack. She took photos of families that were affected by the bombings. She toured urban and outskirt areas of California capturing their stories and state. Most of the photographs she took during this time have been preserved in the National Archives on Still Photographs Division website and Bancroft Library in the University of California.

She received the Guggenheim Fellowship in 1941 for best photography work. She became one of the faculty members at California School of Fine Arts in 1945. She was also a co-founder of the photographic magazine titled ‘Aperture’ (1952).

Dorothea Lange was married to Maynard Dixon in 1920 and together had two sons, Daniel who was born in 1925 and John in 1930. She divorced Dixon in 1935 and was married to Paul Schuster Taylor with whom they worked together to capture the lives of the exploited migrant laborers. She died on October 11, 1965, at the age of seventy in San Francisco, California.