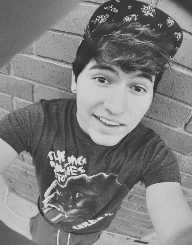 Justin Caylen Castillo is an American vlogger who is best known for his work on YouTube where he has amassed over four hundred million viewers.

He goes by the name J.C which was how he became known to friends in grade school. Castillo legally changed his name Justin Cloud Caylen. He attended Sandra Day O’Connor High School in Helotes in Texas.

Justin Caylen Castillo posted his first video on his ‘Life with JC’ channel on the video hosting site, YouTube, in 2010. Castillo worked with Connor Franta, Ricky Dillon, Kian Lawley, Sam Pottorff and Trevor Moran in the group, Our2ndLife. The group attracted over two and a half million subscribers before breaking up in 2014.

Franta, a fellow YouTuber, has gone on to start a foundation building wells in Swaziland. Dillon and Moran went into the music industry and released EPs. Lawley and Castillo would work together again on the YouTube show H8TERS. Castillo created other YouTube channels such as theseDudez and jccaylen. He and Lawley also have a combined channel, KianandJc.

In 2015, Justin Caylen Castillo released a compilation album titled, Neptones. Neptones released number one on the Billboard Dance/Electronic Albums chart. The album was released under Heard Well record label. Heard Well was started by the former Our2ndLife colleague, Connor Franta. From his fame, on the internet, Castillo was able to land numerous acting roles on television and in a film.

In 2016, Castillo appeared as Mikey in the film, Boo! A Medea Christmas. The film is part of the Tyler Perry Madea franchise of films. The film was filmed over just a week in Atlanta, Georgia. Critics receiving many negative reviews utterly panned the film. However, it did earn over seventy million dollars at the box office off of a budget of twenty million dollars. The film also featured Kian Lawley.

In 2016, Justin Caylen Castillo also featured in some YouTube productions. Fight of the Living Dead: Experiment 88 saw Castillo tackle a simulated zombie apocalypse. He also appeared in six episodes of the web series T@gged. T@gged is a psychological thriller set in New Mexico and is based on high school children being hunted by a killer. The show was renewed for a second series that will air in 2017.

Justin Caylen Castillo lives in Los Angeles in California. He dated Lia Marie Johnson for a time. Johnson is a singer and actress and is best known for her role in the Nickelodeon movie, Terry, the Tomboy. Johnson and Castillo met while working on YouTube videos together. Castillo is five feet eight inches in height, two inches below average for an American male.