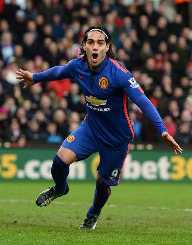 Radamel Falcao is an outstanding soccer striker and a Columbian who has scored many goals in a season. He is currently known as a head captain for Monaco and a striker for Ligue 1.Notably; he is Columbia’s all-time player for earning 60 caps and scoring 27 goals in the country and is the first Columbian to receive the Portuguese Golden Ball award.

Falcao was born on February 10, 1986, to a former pro soccer player, Radamel Garcia Sr. in Santa Marta, Colombia. At the age of 11, Falcao made a tryout with Amsterdam’s AFC Ajax, and at the age of 13, he made his career debut with a Columbian second-tier club ‘Lanceros Boyaca’ becoming the youngest debutant in Columbian football.

In 2000, his coach Hernan Pacheco took more consideration in him allowing him to participate in seven matches that year at the age of 14. On July 25, he scored his first goal for the Lancers’ club at Estadio Olimpico del Sol against Club El Condor. At the age of 15, Falcao joined club Atletico River Plate in Argentina where his persistence earned him the nickname; ‘El Tigre.'

In 2001, Falcao started playing in the 8th division for a youth team known as ‘River Plate.’ He became a regular in the team when he played during the 2005 Torneo Clausura where the team won 3-1. However, he scored for the first time in the club on October 2, with two scores in a game that finished as 3-1 against Independiente. Under the management of Reinaldo Merlo, Falcao completed a total of seven games giving him confidence in the team.

Unfortunately, he sustained severe injuries to the ligaments of his right knee that required surgery and kept out of the games for at least six months. Falcao made his first appearance during the 2006 Copa Sudamericana during the first-half session, a game that ended with a 2-2 draw against Atletico Paranaense. He also played during the 2006 Torneo Apertura and scored once with a win over 2-1 in a match against Rosario Central.

In 2007, he scored on only one game out of the eight games he played. He made his first professional score on September 28, 2007. In 2008, Milan made $ 15 million for Falcao, but River Plate rejected their offer including bids from Aston Villa and Fluminense. He continued to play with the team even though they finished bottom in the 2008 Torneo Apertura.

In 2009, he progressed as a striker and finished as a top scorer with 43 goals. On July, he moved to Europe and joined Porto on 15th of the same month. With the team, he scored four goals in the Portuguese league. On 15th September, he defeated Chelsea with 1-0 during the UEFA Championship League. On 30th of the same month, he made a winning score against Atletico Madrid in the Championship League. This game was followed by a 1-0 home win against Sporting Clube de Portugal on December 12.

In 2010, Falcao scored twice during the Taca de Portugal quarterfinals followed by a winning goal and his fourth goal in the UEFA Championship League Tournament. On April 3, he scored a goal against Maritimo and finished the season as the second highest scorer with 25 goals in the League. Porto completed the last game of the season with a 2-1 win against Chaves with Falcao’s remarkable performance of 34 goals in all competitions.

During the 2010-2011 season, he became the top goal scorer with seven goals during the UEFA Europe League. He won the league title in the 25th round of the league and the top scorer in the competition. By the end of the Europa League Campaign, he scored a record of 17 goals in 14 games.

Notably, Falcao extended his contract with Porto in July 2011 however, by August 18, Porto agreed to transfer him to Atletico Madrid at a transfer fee. With Atletico Madrid, Falcao managed to score a goal for each of the competition with a total of 8 goals in the Europa League Games.

On April 11, 2012, Falcao played his first Madrid Derby against Real Madrid contributing to his 22nd goal of the season and making Atletico the first team to win ten consecutive matches in a Europa Season League. From these competitions, he became the top scorer and created a history of earning the Europa League titles with two different teams.

In the 2012-2013 season, he scored a hat-trick in the UEFA Super Cup final and earned the top scorer title in the La Liga charts with seven goals. He also won the Copa del Rey domestic cup and helped Atletico to defeat Real Madrid. On December 9, Falcao scored five astonishing goals in a match leading to Atletico Madrid’s first appearance in the next Champions League.

On May 2013, Falcao signed a five-year contract with Monaco with a Ligue 1 promotion. His debut with Monaco led to a total of 7 seven goals win and earned him the title top goal scorer in Ligue 1 keeping Monaco on top of the league table. Unfortunately, he suffered severe ACL injury and missed the 2014 FIFA World Cup. On September 1, he joined a temporary loan contract with Manchester United and scored four goals in 29 games, and On May 24, 2015, United refused to buy the player.

On July 3, 2015, Chelsea signed a season-long deal with Falcao and replaced in February 2016 after sustaining severe muscular injuries during training. During the 2015-2016 season, Falcao made his return to Monaco and was appointed as team captain. He ended the season with a Ligue 1 title and with club’s 30 goal scores in 43 appearances. Notably, during the 2017 season, he has scored seven goals in four Monaco’s league matches.

Falcao married Lorelei Taron, an Argentinean singer and the couple has two daughters; Dominique Garcia and Desiree Garcia Taron. Falcao is also a Christian and is of a partial English descent.

Phenomenally, Falcao has earned several international, Individual and Club honors such as Colombia’s South American Youth Championship in 2005, UEFA Super Cup Man of the Match in 2012 and Monaco’s Ligue 1 in the 2016-2017 seasons.

Additionally, during his career, he has broken several records including the Top scorer of the UEFA Super Cup with three goals and the highest goal record in the UEFA Europa League single tournament with 17 goals. He is the Columbia’s all-time top scorer with 26 goals.