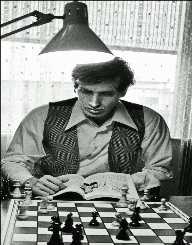 Robert James Fischer was born in Chicago, Illinois on March 9, 1943. In his birth certificate, Hans-Gerhardt Fischer, a German biophysicist, was listed as his father. His mother was a U.S. citizen, but she was born in Switzerland.

After graduating from college, his mother went to Germany to visit her brother. There she met the Nobel Prize winner, geneticist Hermann Joseph Muller. He persuaded her to move to Moscow and study medicine. There she met her future husband and married in 1933.

The anti-Semitism under Joseph Stalin had reemerged, and Regina, together with her daughter Joan moved to Paris, and later to the United States. Since Hans-Gerhard was German, he was not allowed to enter the United States. They officially divorced in 1945. When Bobby was born, his mother was practically homeless. She raised her two children as a single mother and moved to different cities around the country to support the family, working as a teacher. In 1949 the family moved to Brooklyn, New York.

Paul Nemenvi has also been implied as the birth father of Bobby Fischer. During 1950s Bobby's mother Regina was under FBI investigation for her alleged communist sympathies and her time in Moscow. Since Hans-Gerhard never entered the U.S., the FBI found out that Nemenvi had an affair with Regina and also paid her monthly child support. It is believed, that Regina wanted to hide from the stigma that Bobby was born out of wedlock.

Bobby Fischer and his sister Joan learned how to play chess when he was six years old, from instructions in a set they bought in a candy store. Fisher often played on his own, when his sister lost interest in the game. He also intensively studied books on playing chess.

In 1950, the family moved to Manhattan. At the time, his mother thought that Bobby is spending too much time alone with playing chess. She sent a letter to Brooklyn Eagle, to place an ad, whether other people Bobby’s age would be interested in playing chess with him. The newspaper couldn’t figure out how to classify her request and forwarded the letter to Herman Helms, the “Dean of American Chess.” He answered Fisher’s mother that he could play with the Master Max Paley, the former Scottish champion.

Fisher held on for 15 minutes but eventually lost to the chess master. Many were impressed by Fisher’s play. He met Carmine Nigro, an American chess expert who became his teacher. When Fisher was 12 years old, he joined the Manhattan Chess Club - the most active club in the country.

He later started to learn with William Lombardy, who played a big part in Fisher’s becoming a World Champion.

In 1960s Bobby Fischer continued to play in U.S. and world championship matches. He became widely known not only because of his skills but also for his erratic and paranoid commentary. In the 1970s he had a 20-game winning streak.

Fisher made chess history when in 1972, he defeated Soviet Union’s player Boris Spassky in Reykjavik, Iceland world championships. At the time, he was the first American to win the title. The tournament became known as the Match of The Century and took on iconic proportions since it was seen as a symbolic victory of democracy over Communism in the midst of the Cold War.

Fisher's behavior continued to make headlines. In the mid-1970s he refused to play Anatoly Karpov, who challenged his title. After he won the title, Fischer did not play a competitive game in public for almost 20 years. In 1977, he played three games against MIT Greenblatt computer program and won them all.

In 1981, Fisher stayed at home of grandmaster Peter Biyiasas, where he defeated the master 17 times. Biyiasas later told that Fisher believed that there is no one worthy of him to play with.

In 1992, Bobby Fischer traveled to Yugoslavia, to play a $5 million rematch with Spassky. At the time, going to Yugoslavia was forbidden for U.S citizens. Fisher lived abroad for several years to avoid criminal charges. He has known for his anti-Semitic diatribes, and also, on a broadcast on the radio, he celebrated the 9/11 attacks on World Trade Center.

In July 2004, Fischer was trying to leave Japan with an invalid passport. He was jailed for several months, but eventually got granted citizenship of Iceland. He died of kidney failure in 2008. A Japanese woman, Miyoko Watai, who was Japan’s chess champion claimed that she and Fischer married in 2004. The validity of their marriage was questioned, but in the end, she was ruled as Fisher's widow and sole heir to his estate. Fishers alleged that his Filipino daughter Jinky Young also participated in the battle for a property. Fisher's body was exhumed for DNA testing, and the girl turned out not to be his daughter.