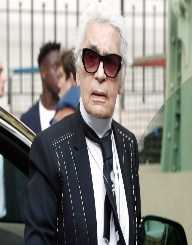 Karl Lagerfeld is a Paris-based photographer, fashion designer,  and author. The German native is widely known for his white hair, long sleeved collar shirts, black glasses, and a professional designer look trademark that never goes unnoticed. Karl Lagerfeld has been the real change in the fashion industry coming up with trends that attract a large fashion audience. His brands are unmatched, and everybody takes pride in wearing the Karl Lagerfeld brands (KL).

Karl Otto Lagerfeld was born on the dusk of September 10, 1993, in Hamburg, Germany. His parents, Elisabeth Bahlmann and Otto Lagerfeld got married in 1930, and three years down the marriage line, a son was born. His father owned a milk company that supplied and exported evaporated milk, a deal which got him a net worth above the average Hamburg residents. His mother was a lingerie seller, a business she stopped after some years of marriage.

Karl has always misrepresented his birth date saying that he is younger than people say. Recently, he held a birthday party at 70 while in the real sense he is supposed to be celebrating his 75thanniversary. He has never announced publicly of his birthdate but gives assumption that he was born between 1933 -1938. He is a hard nut to crack, and his real age is a secret he is willing to die with.

In 1995, Karl Lagerfeld participated in a design competition that invited designers from all over the world. The competition, sponsored by International Wool Secretariat, was meant to bring into limelight prospect designers as well as expose great works by already established fashion designers. Karl saw this as an opportunity to trade his preparedness for luck. He designed classy coats that saw him win the award in the coats category landing him his first job as Pierre Balmain’s assistant.

After working for Pierre Balmain, Karl Lagerfeld moved to a higher paying job and signed a designing contract with Jean Patou. Karl would make two houteCouture each year for the next five years as the contract stated. This was an opportunity of a lifetime. Karl performed to his level best and produced amazing designs that got him a ticket to have his products featured in a two-hour presentation. Karl used Roland Karl instead of his real name Karl Lagerfeld.

In 1962, Karl’s designs had started trending in many showrooms making him a star in the fashion industry. However, he received a lot of critics from media discrediting his work as not up to the standard. For instance, there was an article published in the local magazine stating how the 25-year-old man is taking the industry with poor designs. This, however, didn’t kill Karl’s motive to make it big. He designed skirts and cocktail dresses, but then there were still critics on how they had a wide open on the front and a deep cut on the back.

Karl Lagerfeld designed black short skirts which he named “K” with a straight line in front, had a lowness of the skirt and had curved waist. The silhouette later hit the market but was not sold as he had thought it would. At this period, Ladies wished to wear long dresses that covered their body from neck to the toe. Later in 1960, Karl Lagerfeld designed special hats with pancake-shaped satin. The collection performed better than his previous collection although it never got the groundbreaking attention he needed.

Karl Lagerfeld almost gave up and thought of going back to school because he thought that he was failing to get a breakthrough in the industry and that he needed to learn more about fashion and design. Karl gave the thought a try, but later gave up on the idea and found a place on one of the beaches where he relaxed for two consecutive years studying life.

Back To Fashion Industry

After the two year break from designing and fashion industry, Karl Lagerfeld got a contract to work with Tiziani, a Roman couture house which later became a ready-to-wear house, owned by Evan Richard. Karl designed about 90 pieces before collaborating with Evans Richard, a renowned fashion designer, to release their first collection. This time, the collection hit the fashion market with thunder. Karl Lagerfeld sent invitations to other famous designers and models to try the collection as a marketing strategy that yielded great results. Karl worked for the Tiziani fashion house until 1969 in a move to establish his solo designs.

While still working for Tiziani, Karl Lagerfeld was also freelancing for French fashion house Chloé. He initialized the freelancing in 1964 designing two pieces each year until in 1970 when he designed the full collection. Later in the same year, he started a collaboration to design for Roman houte-couture house Curiel, which was owned by the late GigliolaCuriel. In 1972, he signed a new contract to design for Italian Fashion House Fendi, which was known for its unique production of fashion wear made of fur.

The year 1973 was a great year for Karl Lagerfeld as his collection garnered headlines terming his collection as unique and high camp. Karl was featured in many fashion shows interviewing him on his collections. Karl then indulged in designing theatrical attires and costumes until the late 80's. In 1982, Karl had 30 licenses with a Japanese company Isetan, creating men and women collections. He also had a lingerie business line in the U.S produced by the renowned fashion designer Eve Stilthmann. Also, he was designing shoe brands and sweaters and worked with fashion adviser Treviria.

In 2002, Karl Lagerfeld collaborated with Diesel creative team to come up with a collection that was featured in fashion shows in Parish Fashion Week. More than 90% of the trousers were sold in New York despite their competitive prices ranging from $250-$1,000.This was the breakthrough and dominance Karl had been waiting for since he joined the fashion industry.

Karl Lagerfeld designed costumes for singer Madonna, Kylie Minogue, and Carmen. Karl Lagerfeld then collaborated with H&M who sold Lagerfeld collection in all of their outlets although Karl had an inside fear that working with lower-end brands would taint his global designer image. Other than this, Karl photographed nude pictures of female models and also photographed singer Mariah Carey for the cover page shots of V magazine. In 2013. Karl Lagerfeld directed the film Once Upon a Time, Which also garnered the headlines.

Karl Lagerfeld dated the late socialite Jacques de Bascher who died in 1989. Karl has a sister living in America aged 83-year-old. They have not met for more than 40 years as her sister believes that her brother is a busy man and cannot get time to visit. She, however, says that she will be grand to have a cold coke together with her younger brother.

Karl Lagerfeld has a cat named Choupette whom he says he would marry if it was legal. In his latest letter to his sister, Karl sent his portrait holding his dear Choupette. He has no sons but says that he refers to his young models as sons.