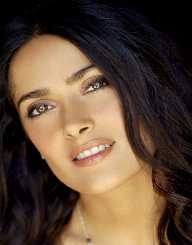 Described as ‘sexy’ by more than half of US population, Salma Hayek is a Mexican-American actress, known for portraying headstrong, tenacious and independent female characters.

Her exceptional acting skills, coupled with beautiful eyes, and a well-maintained figure, has earned her phenomenal success in the Hollywood film industry for more than 20 years.

Apart from acting, she has also enjoyed a successful career as a producer and a model.

Salma Hayek was born on September 2, 1966, in Coatzacoalcos, Mexico. Her full name is Salma Hayek Jimenez. Her family was economically strong, with her father Sami a businessman, and her mother Diana an opera singer. She has Lebanese ancestry. She has one brother named Sami.

Raised in a family with Roman Catholic views, Salma Hayek was sent to the Academy of the Sacred Heartin the USA. She was identified with dyslexia and ADHD. She was an infamous prankster at school and got in trouble with the teachers often.

She then attended theUniversity of Mexico studying International Relations. While at the university, she got serious about considering acting as a career.

Salma Hayek has portrayed strong yet sexy women in her career. Beauty with brains, she was ranked 17 on the list of the smartest people on TV in 2008.

Salma Hayek began her career as a television actress in Mexico with Teresa. She followed this role with Miracle Alley, one of the most successful films in Mexico.

In 1991, at the age of 25, she moved to California. Under Stella Adler’s tutelage, she improved her English and four years, later, her big Hollywood break came.

She was cast opposite Antonio Banderas, in the Robert Rodriguez action movie Desperado. She then appeared in a few films like Fools Rush In, Dogma, Wild Wild West & In the Time of Butterflies. Around this time, she also founded her own production company named Ventanarosa.

Salma Hayek caught everyone’s eye with her role in the 2002 movie, Frida. Her exceptional acting won her a nomination for the Best Actress at the Academy Awards.

Major roles followed soon and Hayek appeared in Once Upon a Time in Mexico (a sequel for Desperado) and After the Sunset.

In 2006, Salma Hayek began the production of Ugly Betty, a comedy show that ran for 5 years. She also made a guest appearance on the show, as Sofia. The role earned her an Emmy Award nomination.

In 2014, she produced an animated movie Kahlil Gibran’s the Prophet. The film garnered positive reviews.

Salma Hayek has been quite active as a spokesperson for several organisations including, Avon Cosmetics, Revlon, Proctor & Gamble, and UNICEF. In 2011, she launched her own cosmetics line called Nuance by Salma Hayek.

Salma Hayek has been very active in movies post-2010. She has starred in films like Grown Ups, Lola, Grown Ups 2, Muppets Most Wanted and most recently Beatriz at Dinner.

She also lent her voice to Kitty Softpaws, in the movie Puss in Boots, as the hero’s love interest.

Salma Hayek is actively involved in supporting and rehabilitating women victims of Violence.

A feminist at heart, she has campaigned for female empowerment. She has also made huge donations to anti-domestic violence groups. She advocates breastfeeding, even feeding a hungry baby her own milk during a UNICEF trip.

Salma Hayek has received several awards and nominations for her creative acting and philanthropic works.

She is a Knight of the National Order of the Legion of Honour (France).

Her other awards include the Glamour Magazine Woman of the Year award (2001), the Harvard foundation Artist of the Year Award (2006) and more.

She was also listed in the Time Magazine 25 Most Influential Hispanics of the World in 2005.

Salma Hayek believes in God, but has no faith in the conservative Church. She is a naturalised American citizen.

Hayek was engaged to Francois Henry Pinault, CEO of Kering, and the couple produced a daughter, Valentina in 2007. Two years later, the couple married each other on Valentine’s Day.