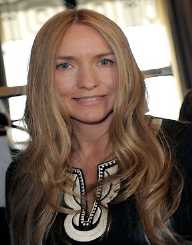 Collette Dinnigan is a widely extolled and industrious textile designer of all times in Australia. She defied all odds when she targeted the lingerie industry in Australia at a time when people were not into purchasing fancy lingerie. However, this did not stop her. This led her to move from lingerie design to blouses and trousers and to also get a spot to showcase her ready-to-wear collection at a show in Paris on October 1995.

On September 24, 1965, Collette Dinnigan was born in Durban, South Africa to Des Dinnigan who is Irish and to Sheila Dinnigan. Dinnigan’s mother owned a modeling agency where she also designed textiles. At the age of eight, her family and she sailed on a yacht for some years. They eventually set sail around Western Coast of Australia where they settled in New Zealand.

Despite her dreams of wanting to become a marine biologist or a veterinary, Collette graduated from Wellington Polytechnic where she took Fashion and Textile as her course. Thereafter, she moved to Sydney, Australia where she worked at the Australian Broadcasting Corporation in the Costume design department.

Collette Dinnigan had her first major breakthrough in her career in 1990, where her hand-embroidered and French-inspired lingerie was shot in a catalog at the Alice Motel in Tamarama. In 1992, she launched her first store which was located on William Street, Paddington, Sydney. The retail store became the desired stop-shop for dresses, prints and amazingly crafted dresses. She then started exporting to other stores such as Barneys in New York, Hong Kong and Harvey Nichols in London.

In 1995, Collette Dinnigan showcased her ‘ready-to-wear collection’ in Paris. In the same year, she opened her second store based at Chapel Street, Melbourne. In 1996, Dinnigan was invited to showcase at the Paris Fashion Week by Chambre Syndicale de la Haute Couture, a regulating commission for fashion houses based in France. This then landed her a position on the Executive Board in 2008.

Due to her consistent accomplishments, Collette Dinnigan was appointed as an advisor to the South Australian Wool Board in 1997. In 1998, she was named Chairman of the New South Wales Small Business Corporation. Two years later, Dinnigan had her autumn/winter Collection and her Resort 2001 range exhibited for Fashion in motion at the London’s Victoria and Albert Museum. In the same year, she opened her third retail store in Chelsea marking her 10 years’ anniversary in the fashion industry.

In 2002, Collette Dinnigan teamed up with UK retailer, Marks & Spencer for the creation of a line of lingerie for their stores. The collection was named ‘Wild Hearts’. She collaborated with Target to deliver ‘Wild Hearts’ to a targeted customer via retail stores in 2008.

In 2010, marking her 10 years’ anniversary, Dinnigan once again partnered up with Marks & Spencer in launching her new lingerie collection, ‘Collette’. This led to the collection being stocked up by retailers worldwide.

Alongside other designers, Collette Dinnigan was at the ‘Audi Fashion Festival’ Singapore in October 2013. This marked her as the first Australian Designer to feature in the show.  Consequently, in the same year, she announced her retirement on October 29th from the Paris Fashion Week. According to her, she left the industry to spend more time with the family.

In 1996, Collette Dinnigan won the Australian Designer of the year. In the following year, she was awarded the Louis Vuitton’s Business Award. In 1998, she got an award for excellence from the Fashion Group International. In the same year, she was also admitted into the ‘Australia’s Businesswomen’s Hall of Fame’

In 2001 and 2003, Collette Dinnigan was voted as one of Australia’s 50 Most Beautiful Exports. During the same period in 2002, she received the Leading Women Entrepreneurs of the World Award. In addition, she was awarded the CLEO and Maybelline Celebrity Designer of the Year in 2004. In 2005, Dinnigan was honored by having her image included on a stamp by the Australian post. National Retailers Association for Fashion Excellence in March 2008 also gave her an award.

Collette Dinnigan has two children. She has a daughter together with Richard Wilkins whom she dated for a brief period of time. While in Italy, she married Bradley Cocks and they got a son.