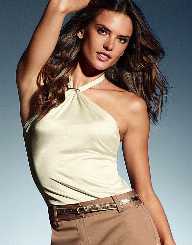 Alessandra Ambrosio is a Brazilian fashion model, best known for her work with the brand Victoria’s Secret. She has frequently been described as one of the world’s sexiest people. The successful model was ranked number 13 on Forbes’ list of highest paid models of 2016, with earnings for that year estimated at 5 million dollars.

Alessandra Corine Maria Ambrosio was born in Erechim, Brazil on April 11, 1981, to Luis and Lucilda Ambrosio. Her father runs two gas stations in Erechim, with which he supported his family. The thirty-five-year-old actress grew up with her parents and younger sister Aline. The family is of Italian, Portuguese, and Polish descent.

As a child, Alessandra wanted to become a doctor. Although she had a definite skill for modeling, the young Alessandra felt insecure about her ears, feeling they stuck out too much. When she was 11, she underwent surgery to correct the issue. However, complications following the surgery left her in a lot of pain, and she had to endure several mini-surgeries to repair the problems. This negative experience has put her off of any other plastic surgeries. When Alessandra was 12, she started taking modeling classes, and when she was 15, she modeled for Dilson Stein.

In 1996, Alessandra Ambrosio participated in the Elite Model Look contest, which has been credited for discovering other famous models, like Cindy Crawford and Gisele Bündchen. Although she didn’t win, this contest helped launched her career. After this, she appeared on the cover of Elle Magazine and was hired by Guess to model for their Fall 2000 Millennium Campaign. Since the beginning of her career, she has appeared in over 70 international magazine covers, including Cosmopolitan, Elle, GQ, Marie Claire, and Vogue.

In 2000 she signed with Victoria’s Secret, the brand for which she is best known. She became the first ambassador for the brand’s PINK line in 2004. Alessandra has appeared several times in the famous Victoria’s Secret Fashion Show. Among her most notable appearances was the fashion show of 2005, in which she walked the runway wearing lingerie made entirely of candy.

Then, in 2008, Alessandra walked on the show after just three months of having given birth to her daughter. In 2011, while pregnant with her son, she carried the most massive set of wings that have been made for the show (13.5 kg). In 2012 she was chosen to wear the jewel-encrusted Fantasy Bra, and then again in 2014 along with fellow model Adriana Lima.

Apart from modeling, Ambrosio has also ventured into fashion design. In 2004, she launched a line of swimwear called Alessandra Ambrosio by Sais. Then, in 2014 she began Ále by Alessandra, her fashion and lifestyle brand aimed at women between 18 and 35 years old.

Alessandra has also appeared in movies and TV shows. In 2015, she appeared in the Brazilian soap opera Verdades Secrets as the ex-model Samia. She has also made several cameos, including one in the James Bond movie Casino Royale (2006), as a tennis player. Ambrosio was a guest judge on Project Runway Season 2: Team Lingerie. She appeared to herself in Teenage Mutant Ninja Turtles: Out of the Shadows (2016).

In the late 1990s, Alessandra’s father was diagnosed with multiple sclerosis. Witnessing her father battle with the disease has had a significant impact on her life. In the early 2000s, she became an official spokesperson for the National Multiple Sclerosis Society, helping to raise awareness for this disease.

Alessandra Ambrosio loves surfing, seeing bands, and staying active. Among other exercises, she practices the Brazilian martial art capoeira to keep in shape. Her favorite foods include chocolate and bacon.