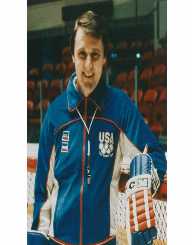 Herb Brooks was born on August 5, 1937, in Saint Paul, Minnesota, USA. His parents were Pauline and Herbert Sr. He also had two younger siblings.

Herb Brooks loved to play hockey ever since he was a child. He joined the Johnson High School hockey team when he attended the same school. While on the team, the school had more than it’s fair share of victories. After graduating from high school, Herb Brooks attended the University of Minnesota. While attended school here, he also played on the school’s hockey team-- the Minnesota Gophers. He played on this team from when he first entered the school until he graduated (1955 - 1959).

After college, Herb Brooks did all he could to secure a spot on the American Olympic hockey team. He was the last member of the team to be cut in the 1960’s Olympics. He tried to join the team in 1964 and 1968 and managed to earn a spot on the team both times. However, the team did not win any medals either time that he was on the team.

Since Herb Brooks was such a fantastic hockey player in his youth, it was no surprise when he started to coach hockey later in life. He began his official coaching career in 1969. One of the hockey teams he coached was the Minnesota Golden Gophers. This team was extremely successful, winning three NCPP championships while Brooks was the coach. During his time as coach, the team one 175 times out of 296 games.

The team that Brooks was most famous for coaching was the American team in the 1980 Olympics. Herb Brooks began coaching for this team in 1979. He wanted to make a unique style of playing that would confused and impress their opponents. To do this, he mixed American and Canadian styles of hockey playing. The team won several matches before going up again for the Russian hockey team. At this time, the United States and Russia were near the end of the Cold War. Tensions were high, and Americans and Russians were both on edge, wondering who would win the match. Both teams were great. The game was close, but Brooks coaching eventually led the team to victory. The match was so close that the win was later dubbed “The Miracle on Ice.”

After the victory in the Olympics, Herb Brooks was offered a career as a National Hockey League (NHL) coach. He turned down the position and coached in Switzerland for a year before returning to the United States. He returned to coaching in 1981, when he finally signed on with the NHL to coach the New York Rangers hockey team.

He coached for this team until 1985. Beginning in 1987, Herb Brooks coached various teams in the NHL, never staying with one team for very long. He retired from coaching in 2000 but later came out of retirement to coach the United States hockey team in the 2002 Olympics. This time, the team won the silver medal (beating Russia but losing to Canada).

In 1982, he was named the NHL Coach of the Year by Sporting News magazine.

In 2002, Herb Brooks was awarded the legendary hockey award, the Lester Patrick Award.

After his death, in 2006, he was inducted into the Hockey Hall of Fame.

Herb Brooks his wife Patti in 1965. The couple later had two children together: Danny and Kelly. The couple was married until Herb’s death in 2003.

In 2004, Disney made a movie about Brooks’ famous hockey match in the 1980 Olympics. In the film, Herb Brooks was played by Kurt Russell.

In 2005, after Brooks’s death, the Olympic ice arena (in New York) was renamed the Herb Brooks Arena.

At his old high school, Minnesota State High School, a hockey award has been named after him.