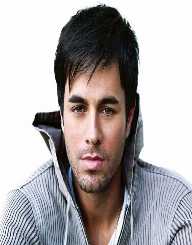 Enrique Iglesias is a singer, songwriter; he also model and actor.

Enrique Miguel Iglesias Preysler, stage name Enrique Iglesias, was born on 8th of May 1975 in Madrid, Spain. He is the youngest of three children, his elder brother Julio and his sister Chabeli have parents Julio Iglesias and Isabel Preysler. The parents divorced in 1979.

Enrique and his siblings lived with their mother until the kidnapping of the grandfather in 1986. The armed Basque terrorist group kidnaped dr. Julio Iglesias Puga. Fearing for their safety, the children moved to Miami with their father. They had a nanny: Elvira Olivares, who looked after them when Julio was on the road. He attended Gulliver Preparatory School and studied business at the University of Miami. His first live performance was in Hello, Dolly! In Gulliver Private School. The performance started his passion in music.

Enrique Iglesias dropped out of business school after a year, and before that, he approached his father’s former publicist with a demo. Fernán Martínez was the publicist who helped him release a stage name  'Enrique Martínez' from Guatemala. After dropping out, Enrique signed on to Mexican label Fonovisa Records in 1995. He had to travel to Toronto to record his first album

In July 1995, Enrique Iglesias released a self- titled album, it was an instant hit. He followed up with an equality favorable Vivir and Cosas del Amor. In 1999, at Will Smith’s request, Enrique released "Bailamos" ("We Dance"), a song featured in Wild Wild West, at the request of Will Smith.

Enrique released his first English album: Enrique with Interscope. He performed in Super Bowl XXXIV in 2000. After being accused of not being able to sing live by Howard Stern, Enrique sang on Stern’s show live in June 2000; the controversy was the best promotion for his next album: Escape.

In total, Enrique Iglesias has ten albums to his name. He also co-produced an off-Broadway musical Four Guys Named Jose and Una Mujer Named Maria. Enrique dabbled in television and movies, starring in the Robert Rodriguez film Once Upon a Time in Mexico. In 2007, he was a guest star in comedies Two and a Half Men and How I Met Your Mother.

Enrique also had advertisements; he had roles in Pepsi, Tommy Hilfiger and a few more in 2004. He appears as a guest in many shows, becoming a guest judge in X-Factor U. S. 2011.

Enrique Iglesias was part of Project Download to Donate in 2010. He was co-producer of the album Download to Donate for Haiti, the album to support the victims of 2010 Haiti earthquake. He also urged his followers to donate money through the American Red Cross to help victims of Typhoon Haiyan in the Philippines. He also supports charities such as City of Hope, Music for Relief, Special Olympics, The Salvation Army, etc., and charitable causes like Alex's Lemonade Stand Foundation and hunger relief.

In 2003, Enrique Iglesias had his signature mole removed due to possible skin cancer concerns.