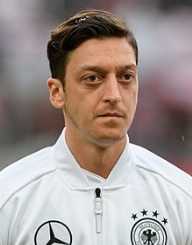 Mesut Ozil was born in North Rhine-Westphalia, Germany on October 15, 1988. He is the son of Mustafa Ozil and his wife Gulizar. He is a German of Turkish origin. His grandparents crossed to German in search of better economic opportunities in the early 1900s.

He started playing football in his childhood. He joined Rot-Weiss-Essen club in 2000 at the age of 12. He played for the club for 5 years before moving on to FC Schalke. He joined the youth academy in Schalke in 2005. He grew within the club ranks for three years and graduated to play in the senior team.

After creating a legendary name as an attacking midfielder in the youth team, Ozil left the FC Schalke team for Werder Bremen in 2008 aged 20. He signed a lucrative contract with Bremen for a period of 3 years. He opened his scoring chart with Bremen on April 26, 2008. He scored in the 2-1 win for Bremen in a German League match against Karlsruhe SC. He established his regular position in the first team as the dependable attacking midfielder.

The 2009-2010 Bundesliga season marked his second year at FC Schalke. Ozil created assist for his teammates and scored goals himself. In the season, he scored the most important goal against his former club Schalke. Ozil marked his century goal in a match against Schalke. His goal ensured Bremen reached the German Cup finals. Bremen lost to the mercurial Bavarian team Bayern Munich, with a humiliating 4-0 margin.

When German qualified for the South Africa 2010 world cup tournament, Ozil got selected as a midfielder. He propelled the German team into reaching the finals. They, however, lost to Spain by a lone goal from the Spanish midfielder Andres Iniesta. His football artistry impressed the footballing world. He became a target of the big spending European clubs. Four clubs lined up for his signature. These were Arsenal, Manchester United, Real Madrid, and Barcelona.

He played a pivotal role in Brazil in 2014. He helped the Germans win the FIFA World Cup in Brazil. On the way to their win, Ozil helped his team crush favorites Brazil with a humiliating 7-1 defeat in the iconic Maracana Stadium.

In the end, Ozil signed for the star-studded Real Madrid or Los Marenges as popularly known in Spain. Madrid paid a transfer fee of 15 million Euros to Bremen. Ozil joined the Portuguese Cristiano Ronaldo to forge a formidable attacking pair. Ozil played his first match against the middle table team Real Mallorca. He continued playing for Madrid helping the team with convincing wins.

Ozil had a taste of the UEFA Champions League with Madrid against Ajax Amsterdam on September 15, 2010. He registered a successful debut season with Madrid. In the first season, he scored a few goals as a midfielder. He, however, marked 25 assists, a record for the season in all the top leagues in Europe. Coach Jose Mourinho pushed Ozil to a regular playing position on the team in the 2010-2011 season. He gifted Ozil with the coveted number 10 jersey. With the prize, came responsibilities. Ozil became the central motor engine of the team. Despite his skills, Ozil scored few goals but held up in assists. He scored his first season goal against their perennial rivals FC Barcelona.

In the absence of the Brazilian Kaka, Ozil got free role to dictate the play of the game. Madrid won the Spanish League for the 32nd time, with Ozil claiming the assists honors with 17 assists. He missed out on the Ballon d’Or Award after being nominated.

He played for the Madrid club for three straight seasons. At Madrid, Ozil won the Spanish League, Spanish Cup and the UEFA Champions League.

In September 2013, he left Madrid for the English team Arsenal. He relinquished his role at Madrid to the Croatian Luka Modric. He signed for the London club after a transfer fee of GBP 42.5 million, making him the most expensive German player.

As in Spain, Ozil has cemented the title of the midfield kingpin in the English league. He is the leading footballer in assists since he joined Arsenal. He helped Arsenal win three successive titles in 2014, 2015 and 20117.

Ozil is a practicing Muslim. He supports philanthropic ventures as part of his Islamic duties. In 2014 after winning the World Cup, he donated his cash prize of USD 500,000 to cater for the treatment of Brazilian children from the poor communities.

On his playing style on the field, Ozil attributes his artistry to a blend of two things. He derives his flare from the Turkish style of football and the hardworking culture of the Germans.

Though he keeps away from the limelight when not on the field, Ozil is involved with the growth of young talent in his home town in the Rhine region. He is involved with the German youth of Turkish origin, on the need to fight extremist terrorism in the name of religion.