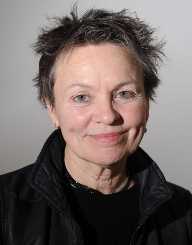 Laurie Anderson was born Laura Phillips on June 5, 1947. She is an American experimental artist and musician. Anderson’s work has earned her period of commercial success in the 1980s and critical acclaim throughout her career. She does more than performance art; she is also an innovator in the world of electronic music, creating several devices for use in her presentations.

The following year, she illustrated an underground comic called Baloney Moccasins, illustrated several children’s books, and worked as an art critic and instructor. One of her best-known works from the time was entitled Duets on Ice, during which she played a specially-made violin while wearing skates frozen in a chunk of ice. The performance ended when the ice melted.

Laurie Anderson was fond of mixing media in her performances. In 1977, she created a music single, “It’s Not the Bullet that Kills You, It’s the Hole.” Later, in 1981, she made herself known to a wider public with an eight-minute song called “O Superman.” This reached number two on England’s pop music charts. Her success granted her a seven-year album contract with Warner Brothers. Other albums released in the 1980s were You’re the Guy I Want to Share My Money With (1981) and Big Science (1982).

One of her more significant projects was a multimedia presentation in four parts, called United States I-IV. First performed in 1983 at the Brooklyn Academy of Music, this ambitious piece intertwined music, film, photography, animation, and drawings with text. It was broken into four sections, each with its theme: Transportation, Politics, Money, and Love.

From her Mister Heartbreak (1984) album, the video made of her song, “Sharkey’s Day” was one of the most popular ever recorded. Her ability to mix words, music, and images spoke to people. She next tried her hand at film, creating Home of the Brave in 1986 before completing more albums in the 1980s and 1990s.

In 2003, Laurie Anderson became NASA’s first artist-in-residence. This sparked an interest in space for Anderson. She debuted a performance piece in 2004 called The End of the Moon. She continued her space theme in Japan the following year for Expo 2005. Anderson even visited the Russian space program with the Arts Catalyst. Then, she gave performances at the Space Soon event, sponsored by the Arts Catalyst, based on her experiences. Starting in the 1990s, Anderson and Lou Reed had an ongoing relationship. They were married in 2008 until his passing in 2013.

In 1980, Laurie Anderson was awarded an honorary doctorate from the San Francisco Art Institute. In 1982, she received a Guggenheim Fellowship for the Creative Arts-Film. She was awarded a Residency at the American Academy in Rome in 2006. The following year, she was awarded the 2007 Gish Prize.

The awards kept coming. In 2012, she received the designation, Inaugural Distinguished Artist-In-Residence at the Rensselaer Polytechnic Institute of Troy, New York. Then, in 2013, she received an honorary doctorate from the Aalto University School of Arts, Design, and Architecture.

The tape-bow violin was Laurie Anderson's first invention in 1977. She placed a magnetic tape head in the bridge of the violin and a magnetic tape in the bow. In more recent years, she used MIDI-based audio samples instead.

The talking stick was Anderson’s next invention. She used it in her Moby-Dick Tour of 1999-2000. It was a MIDI controller that allowed her to control sounds.

Laurie Anderson used voice filters in her work for many years. She used the filter to lower her voice and create a “character” she called the Voice of Authority or conscience. This voice and character were used to make social commentary for more than one performance piece.