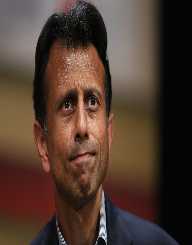 American politician Piyush “Bobby” Jindal was born on June 10, 1971, in Baton Rouge, Louisiana. His parents Raj and Amar Jindal are from Punjab, India. His father is a civil engineer, and his mother was a nuclear physicist. Jindal attended the Baton Rouge Magnet High School which he graduated in 1988. While Jindal was in high school, he started various enterprises like the computer newsletter, candy business and mail-order service company.

After high school Jindal went to Brown University and graduated with honors, majoring in biology and public policy. He was admitted to the Program in Liberal Medical Education, which guaranteed him a place at Brown Medical School. In Brown, he was leading the College Republicans student group. He was also accepted in Harvard Medical School and Yale Law School, but he went to study in New College, Oxford as a Rhodes Scholar. He received an M.Litt. Degree in political science.

After finishing his studies in Oxford, Jindal was proposed to do a D. Phil.in politics, but he turned down the offer to join the consulting firm McKinsey & Company. He was an intern for the office of Rep. Jim McCrery of Louisiana. His assignment was to study Medicare and report on possible solutions for its financial problems.

In 1993 McCrery introduced Jindal to Governor Murphy Foster. Three years later, Foster appointed Jindal as Secretary of Louisiana Department of Health and Hospitals. Jindal was 24 years old at the time. Under his term, Louisiana Medicare rose from bankruptcy to $220 million surpluses and was nationally at third place in child healthcare screenings. At 28 years of age, Jindal was appointed the president of the University of Louisiana System.

During the Bush administration, Jindal was nominated to be the Assistant Secretary of Health and Human Services. He began his service in 2001 but resigned two years later to run for governor in Louisiana.

In 2003 election, Jindal won the primary election by 33% of votes. The largest newspaper endorsed him in the state, mayor of New Orleans, and Republican governor Mike Forster. Eventually, he lost the race for governor to Kathleen Babineaux Blanco. Although he lost the election, running for governor made Jindal a rising star in the Republican party.

In 2004, Jindal ran for Louisiana’s 1st congressional district. He won the position in House of Representatives by 78% vote. He became the first Indian-American to be elected to United States Congress. In 2006, he won the re-election by 88% of the vote. He served as the vice-chairman in committee on the Prevention of Nuclear and Biological attacks. In 2004, he was elected to House assistant majority whip.

In 2007, Jindal announced his candidacy for the governor’s position in Louisiana. He was leading the race from the beginning and remained the leader throughout. Jindal won the election by 54% vote. He was 36 years old, becoming the youngest and first Indian-American sitting governor in United States history.

In 2008, Jindal oversaw one of the largest evacuations in US history of nearly 2 million people, before the Louisiana landfall of Hurricane Gustav. The hurricane resulted in only 16 deaths, and Jindal received praise for his leadership. In 2011 he ran a campaign for reelection. He won the election in the first round, by 66% of the vote. In his second term, Jindal released a plan to eliminate the state income tax, which he felt would expand business investments in the state and raise sales taxes. He soon dropped the plan after negative responses from legislators and the public.

In 2008, it was speculated that Jindal is a possible choice for vice-president nomination. However, Jindal said he would not be the Republican nominee. He expressed admiration for both McCain and Obama. Jindal delivered the official Republican response to Obama’s address to Congress. He called president’s economic stimulus irresponsible and warned against government solutions to the economic crisis. Several Democrats and Republicans poorly received his speech, but many praised him for his opinions.

Jindal was also rumored to be the presidential candidate for 2012, but he denied the rumors. He traveled to support the Mitt Romney-Paul Ryan ticket. The same year, he was listed by the Time magazine as the possible 2016 Republican presidential candidate. In 2015, he announced his candidacy. After polling only at 1 percent of the Republican primary electorate, he announced the end of his run. He later supported Donald Trump’s campaign, saying that he will be the second worst thing after electing Hillary Clinton.

Although Jindal was raised in a Hindu household, he converted to Christianity while in Baton Rouge Magnet High School. Jindal’s younger brother Nikesh is also a registered Republican and supported his brother’s campaign. He graduated from Dartmouth College and Yale Law school and is currently a lawyer in D.C.

Jindal got his nickname Bobby in childhood since he identified with Bobby Brady from the ABC sitcom The Brady Bunch. In 1997 he married Supriya Jolly. They attended the same highs school, but Jolly and her family moved to New Orleans. They started dating much later. Jolly earned a bachelor’s degree and M.B.A. in chemical engineering and is working on a Ph.D. in marketing at Louisiana State University. The couple has three children- Selia Elizabeth, Shaan Robert and Slade Ryan. Their second child was born with a heart defect and had to undergo heart surgery. Since then, Jindal’s have been advocates for children with congenital disabilities.