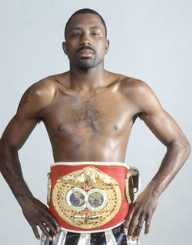 Mark Johnson is a retired African American boxer who won championship titles in the flyweight and the super flyweight divisions.

Mark Johnson was born on August 13, 1972, in the US capital Washington D.C. His real name was Marcellus Joseph Johnson. Johnson grew up in a boxing environment. His father Abraham Johnson alias Ham was a boxing coach. Johnson started training as a boxer in 1976 at the age of five years. He trained under his father and became a notable child prodigy in the game.

Johnson competed in regional tournaments in the US. He won several fights rising to the national limelight. In 1988, he competed in the US national Olympics Trials. He lost to Eric Griffin. He maintained his winning record, despite the loss. In 1989, Johnson won the light flyweight division title in the US national championship games.

Johnson turned to professional boxing on February 24, 1990. He stepped into the ring and won his maiden fight against Ray Gonzalez. He lost his second fight against Richie Wenton in the following month. Johnson posted an unbeaten record winning all his 12 fights from January 1990 to April 1993.

On May 18, 1993, he won the vacant World Boxing Board title in the flyweight division against Alberto Jimenez. Johnson got the title after the judges awarded a split division to his favor. He subsequently defended this title in 10 straight title fights between August 1993 and July 1995.

On May 4, 1996, Johnson stepped into the ring for the thirtieth fight as a professional boxer. He fought against Francisco Tejedor for the vacant International Boxing Federation or IBF flyweight title. Johnson won the title with a first-round knockout on Tejedor in California. He became the first African American boxer in history to win the title. He retained the title in the next seven successive title fights.

Johnson switched to the super flyweight division at the fall of 1998. In May 1999, he won against the defending champion Ranatachai Sor Vorapin from Thailand. Johnson again became the first African American holder of the IBF title.

He gained a ferocious tenacity in the ring that scared away most prolific fighters in the division. He won two title fights in August and November 1999. Johnson served for 11 months in a federal jail for assaulting his wife in 2000. He lost his title due to inactivity in the ring while in prison. He returned to the ring in 2001.

Johnson moved up to the bantamweight division. He fought and won two fights before meeting the Mexican national, Rafael Marquez. On October 6, 2001, Johnson got the second defeat of his professional career. The judges offered a split decision in favor of Marquez. A rematch was held on February 23, 2002. Marquez won the rematch with a sublime performance to win the vacant IBF Bantamweight title. Marquez stopped Johnson in the eighth round with a technical knockout. Johnson lost the third match of his professional career, and his first knockout ever.

He went back to the super flyweight division after the knockout. He fought one fight before meeting Fernando Montiel for the vacant World Boxing Organization super flyweight title. Johnson won the title over his opponent in the match held on August 16, 2003. On March 6, 2004, he defended his title against Luis Bolano in Connecticut, USA. Johnson lost the title to Ivan Hernandez on September 25, 2004. He suffered the second knockout of his career in the eighth round of the fight. He stepped back into the ring against Jhonny Gonzalez on February 25, 2006. Gonzalez was undefeated in 10 fights since May 2009. Johnson lost the fight in the eighth round through a knockout. Johnson got the rare second straight defeat in his boxing career.

Johnson retired from the ring after his defeat by Gonzalez. He posted an impressive career of 50 fights with a win in 44 fights, with 28 knockouts. He lost 5 matches and had one no contest match against Raul Juarez on November 19, 1999.

After leaving boxing at the age of 34 years, Johnson became a member of the Department of Parks and Recreation. As a Roving Leader of the organization, Johnson dealt with counseling services to the youth within the capital metropolitan. He mentored the youth in several programs concerning violence, sex, drug abuse and the need to stay in school.

He has often narrated his wish to return to the ring. He sees his contribution in the ring as a referee to be his way of giving back to the sport that made his world.

On June 10, 2012, Marcellus Joseph Johnson or Mark “Too Sharp” Johnson was inducted at the age of 40 years. He became the youngest and first boxer from the capital to be inducted into the International Boxing Hall.

Johnson entered the ring and became one of the initial pound for pound boxers. He became the first African American to win world titles in fly and super flyweight categories. He was the youngest inductee in the hall of fame.