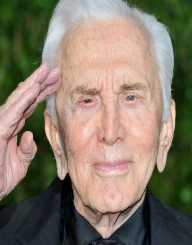 Kirk Douglas is a producer as well as an actor that was raised in the Ghetto to become an American superstar. His parents were very poor and are Jewish immigrants from present-day Belarus. At his young age, he was very keen on education and athlete. He was known to be so fond of acting that he realized that scholarship would be the road to his successful training in the field of acting. He got enrolled in American Academy of Dramatic Arts with his talents.

Kirk Douglas got opened up to comedies and could penetrate into the film industries with his penetrating gaze and gravelly voice. He often played roles that were compelling, and this brought him some reviews. He has acted with different actors as well as in different types of films including action and sci-fi movies. He is an Oscar nominee.

December 9, 1916, brought the young Kirk Douglas into the family of Danielovitch and Bryna Sanglel Danielovitch. He was born in Amsterdam, New York, the USA having six other sisters. He worked at different jobs for him to support his dream, himself and the family. Upon the completion of his high school, he got a loan from the Dean of the St Lawrence University for his studies. He later got a scholarship to study acting in New York at the American Academy of Dramatic Arts has recognized his acting talent.

Kirk Douglas started his acting career in few but minor roles in various Broadway production. He, however, joined the US Navy in 1941 where he served as an officer in the Second World War. He returned to the theater after the end of the war in 1945.  After his naval service, he got a lead role in The Strange of Love of Martha Ivers. This movie got a rave of reviews. Later on, in 1948, he acted in a movie alongside Burt Lancaster. He also received his first Oscar nomination in 1949 for his role as Champion.

As at this time, he has become a sought-after actor. He worked with Billy Wilder in Ace in the Hole. He later started his production company Bryna Productions in 1955. He got his third Oscar nomination with the movie Lust for Life. He later acted in an anti-war epic Paths of Glory before he makes the popularly acclaimed movie Spartacus in 1960 under the banner of his production company. However, during the making of this film, he rebels against the blacklisting of certain Hollywood figures because of their communist views. He even went ahead in hiring the already blacklisted screenwriter, Dalton Trumbo to write his film.

In the 1970s, Kirk Douglas chose to see how his directorial skills fare. He, however, met with little success as a result of the fact that the movie failed to make an impression. His acting career got stalled at almost the same period. He, however, came back to give out great and memorable movies like Tough Guys and The Man from Snowy River.

While a part of Kirk Douglas’ life slowed down, another was at the helm of developing. Kirk Douglas wrote a best-selling autobiography of his life The Ragman’s Son. His talent in fictional and creative writing was shown in the films Dance with the Devil and The Gift. His nonfictional skill was also reflected in Climbing the Mountain: My Search for Film as well as My Stroke of Luck. He, however, did not let the stroke slow his career down after it had affected his speech. He continued acting and starred in a 1999 comedy Diamonds. He got nominated for the Emmy award as a guest appearance in Touched by an Angel. Kirk Douglas continued with his writing projects and published more of books which include “Let’s face it: 90 Years of Living, Loving and Learning among others.

Kirk Douglas was married to Diana Dill on the 2nd day of November 1943. They however divorced on the February 23rd, 1951. The couple has two sons from the marriage. He married Anne Budgens and had two sons too from this marriage. He contributed millions of dollars for building hospitals as well as other institutions. This probably got him the title of the Goodwill Ambassador of the US government. Since 1963 till now, he has held this title.